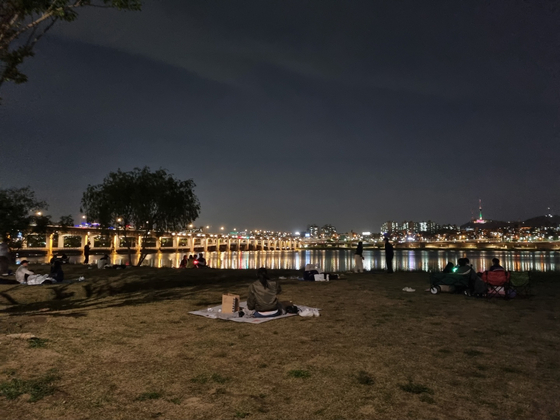 People drink in the Banpo Han River Park in southern Seoul on May 6 around 10 p.m. [CHOI YEON-SU]


On a typical Friday or Saturday night from spring to fall, Han River parks are crowded with people eating and drinking.

The evening of Friday, May 21, was slightly chilly, yet more than 20 groups were scattered around the central part of Yeouido Han River Park in western Seoul, eating delivery food and drinking. Beer cans and soju bottles were strewn about, especially along the riverbank.

The combination of fried chicken and beer, known as chimaek, was made iconic by a scene in the popular TV series "My Love from the Star" (2013-2014), and now life imitates art regularly at one of the 11 parks along the Han River. The young are especially keen on the tasty pairing, and tourists can also be found among them due to the influence of K-dramas overseas.

But that may all change someday. 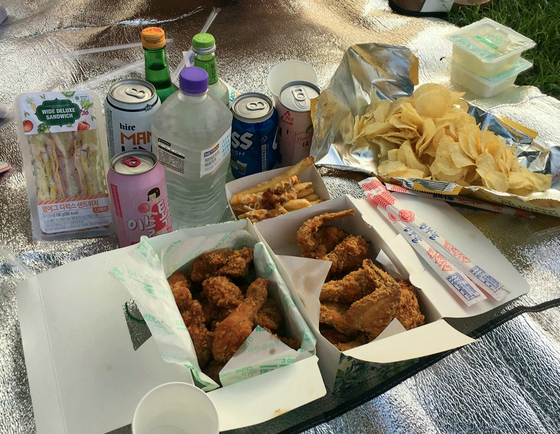 'Chimaek', or fried chicken and beer, is a popular combination for Korean youths, especially in Han River parks. [SCREEN CAPTURE]

"As the number of Covid-19 cases continues to rise, people gathering along the Han River may pose a risk," she said during a Covid-19 briefing on May 12. The National Health Promotion Act was revised last December and goes into effect this coming June 30, which creates room for the city to designate "no-alcohol zones" and fine violators.

Park said that related government agencies will discuss the scope and time frame of potential drinking bans, as well as hold hearings to take public opinion into account.

Talks of strengthening social distancing regulations and potential drinking bans in Han River parks are nothing new, as the city has already been through the coronavirus pandemic for over a year.

However, many Seoulites believe that this time, Covid-19 concerns are only a pretext, and that the recent drowning of a medical student in the Han River is what actually sparked this discussion.

A banner in the Banpo Han River Park asks for information on missing 21-year-old medical student Sohn Jeong-min, on April 29, a day before his body was found. [JEONG JIN-HO]


Twenty-one-year-old medical student Sohn Jeong-min was found dead on April 30 in the river, after having been missing since the early hours of April 25. He had been drinking with a friend at the Banpo Han River Park in southern Seoul prior to his disappearance, and the case has led to endless speculation and no shortage of conspiracy theories.

City officials are not denying the link either: "Han River parks have turned out to be unexpectedly unsafe blind spots," wrote Chairman Kim In-ho of the Seoul Metropolitan Council on social media, in reference to Sohn's death. "We may have to rethink our romanticizing of public drinking."

On top of that, a public petition to the Blue House referring to Sohn's death and demanding a ban on alcohol consumption at Han River parks has over 9,000 signatures as of Thursday. 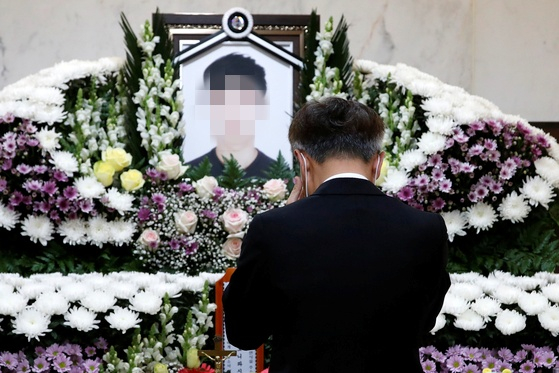 
The change may come slowly, but now Seoulites are left to contemplate Korea's drinking culture and debate whether a drinking ban is necessary in Han River parks.

"Korea is culturally and also legally very lenient towards alcohol consumption in general, not just drinking in public," said Kwak Geum-joo, a psychology professor at Seoul National University. "There are not many regulations regarding public drinking or intoxication in Korea, especially compared to the United States."

"There's also not many other countries where it's normal for people to drink every night and all night. Our society has so many alcoholics that drink every day, but they're unaware because the concept of alcohol dependency is not well known. So we do need to look back and consider how lenient our society has been toward alcohol."

Drinking in public – mostly in parks and on the streets – is commonly seen in Korea especially during warmer seasons and is associated with youth culture. Bustling city-center areas such as Hongdae, Yeonnam-dong, Gangnam and Sinchon are normally crowded with people predominantly in their 20s and 30s drinking indoors and outdoors.

"Outdoor drinking has become more common since the Covid-19 pandemic, as all restaurants and bars must shut down at 10 p.m. due to social distancing regulations," added Kwak. "But the tipsy youths are often unwilling to go home, so they continue to drink outdoors." 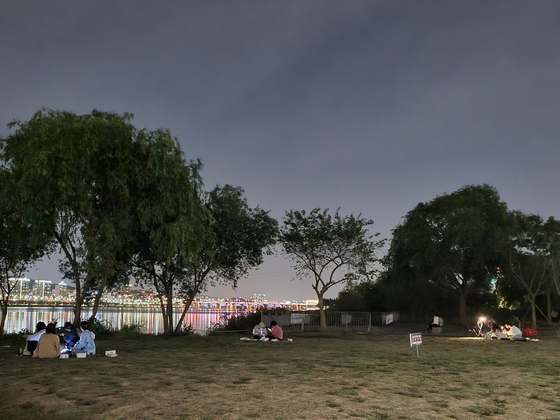 People drink in the Banpo Han River Park on May 6 around 10 p.m. [CHOI YEON-SU]

"I'm bound to see at least a few people who can't walk straight," he said.

What did visitors to the Yeouido Han River Park that night think of the potential drinking ban?

"Of course we should ban drinking here," said the 57-year-old owner of a busy convenience store right on the riverfront, who wished to stay anonymous. "Alcohol causes so many problems around here, and it's such a bad sight. I know it will significantly affect my store's sales, but I'd still support the drinking ban."

Yoon Eo-jin, a 31-year-old woman who was drinking beer by the riverside, agreed that the sight of drunk people in public is unpleasant.

"It's especially not good for the children to see that," she said. "Although I love drinking, and I'm drinking here now, I would still agree if the ban happens. I've always thought that the riverside can be dangerous even for sober people, as they can slip and fall into the water when it's dark." 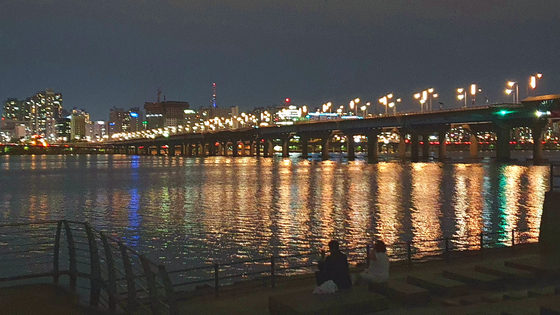 People drink right beside the water in Yeouido Han River Park in western Seoul, on May 21 around 11 p.m. [HALEY YANG]


Her 33-year-old friend who was drinking with her begged to differ. He called the potential ban “idiotic.”

"I don't think Korea's particularly lenient toward public drinking; it's pretty normal in Europe too," he said. "I'm aware of the drowning case, but that can happen anywhere. You could drink near any street in Seoul and get hit by a car."

"If not drinking near the Han River would decrease the number of accidents, then shouldn't we unilaterally ban drinking near any large body of water, or any sort of perceptibly dangerous place?" she asked. "People drink on beaches and while hiking. Alcohol isn't bad; people who drink irresponsibly are, and they are going to be irresponsible wherever they go. That boy [Sohn] just happened to be near the Han River." 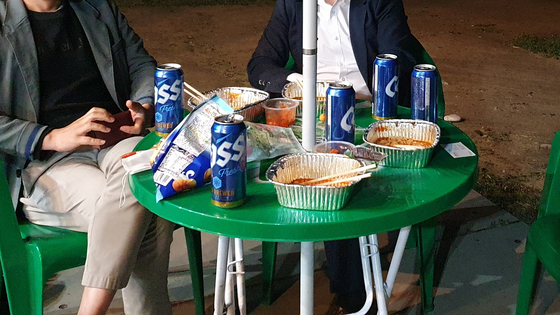 
Some people were on the fence, depending on the reasoning behind the ban.

"The drowning case hasn't even been solved yet. So why are people concluding that drinking caused the drowning?" said 46-year-old Jung Ji-young, who was accompanied by three friends enjoying a night out. "If it's for other reasons, I might be on board with the drinking ban, but if the reason is that student's drowning, I don't think it's reasonable."

"When I first heard about the potential ban, I thought it was for social distancing as the weather is getting warmer," said Shin, about to resume his jog. "I just wondered, 'Why now after a whole year?' Now that I heard that the medical student's death sparked this discussion, I find it irrational. The Han River parks are a place for people to relax and relieve stress, and some do that by enjoying a few drinks. Unless it's for Covid-19 containment, a ban is too extreme." 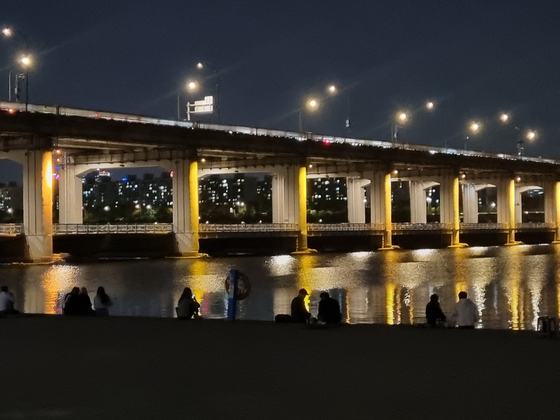 People drink in the Banpo Han River Park on May 6 around 10 p.m. [CHOI YEON-SU]


Others were unsure if the ban would be effective.

"Even if the ban is passed, how will they monitor that? There's so many Han river parks," said Chung. "This feels like a typical hasty measure, which rarely solves the core issue. There's a difference between a responsive government and a reactive one, and this feels like the latter."

A group of five women in their 20s was on the riverbank drinking beer, and one anonymous woman spoke for the group.

"I read that the reason the police are having trouble with the drowning investigation is because that park does not have enough security cameras," she said. "Then shouldn't they install more security cameras or safety nets, not ban drinking? I don't see how it will be effective." 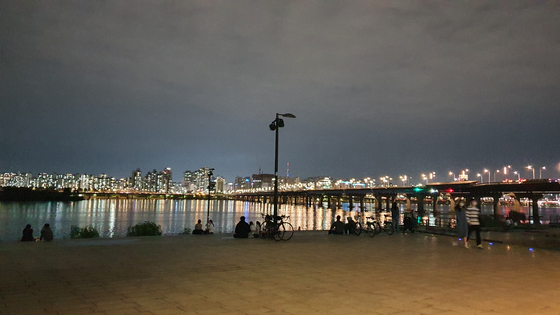 People drink in the Yeouido Han River Park on May 21 around 11 p.m. [HALEY YANG]


Mayor Oh Se-hoon announced Tuesday that the city will install 155 additional security cameras at Han River parks, responding to public concerns after the lack of security cameras became known due to Sohn's death.

"If the government must implement some sort of drinking ban, it must happen gradually," said Professor Kwak. "People are just about to start going out as it's getting warmer. Now's not the time."

"To minimize psychological resistance, the best we can do as of now is ban drinking after certain hours like 11 p.m. or midnight, and also have a grace period," Kwak continued. "The Korean government should also launch a campaign warning against excessive drinking and its harms, like it already does with smoking.

"And if a complete ban is still deemed necessary months later, policy makers need to utilize a bit of reverse psychology. If the ban starts in November when it's getting colder, there will be significantly less resistance." 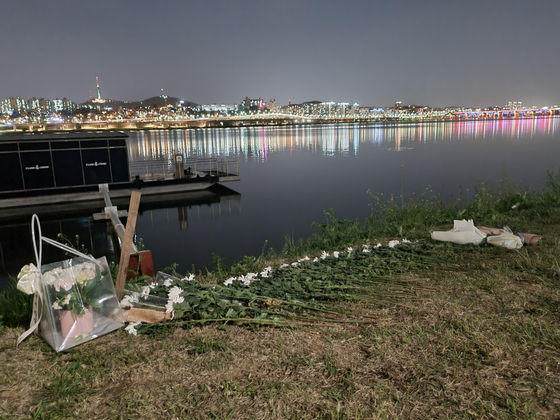 Flowers are placed at Banpo Han River Park in memory of Sohn on May 6. [CHOI YEON-SU]


No matter what ends up happening, for some, this discussion leaves a bitter taste in their mouths.

"I really sympathize with his [Sohn's] family, but I feel like it's an overreaction to one unfortunate event," said Chung. "I live near Seokchon Lake and do you know how many people drown there, either accidentally or on purpose? No one cares!"

Kim Kyung-tae, who was accompanying Jung and also in his mid-40s, spoke from his experience.

"Back in my college days, my university banned drinking on campus after some students had too much to drink and died. But we just drank secretly anyway. My point is, the attitude toward alcohol needs to change, rather than the government telling people what to do. Alcohol consumption is also a matter of personal liberty. Once the government starts enforcing, that's a rollback of democracy."