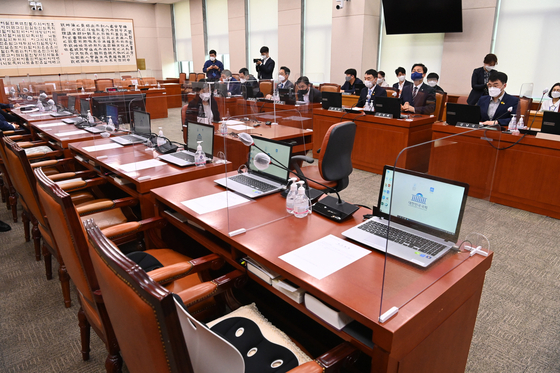 Democratic Party and Open Minjoo Party lawmakers of the Legislation and Judiciary Committee on Monday pass the confirmation hearing report of prosecutor general nominee Kim Oh-soo. Lawmakers of the People Power Party boycotted the voting in protest of President Moon Jae-in's decision to appoint Kim as the new head of the prosecution. [YONHAP]


The ruling party on Monday passed a confirmation hearing report of Prosecutor General Kim Oh-soo, despite opposition lawmakers’ boycott of the voting.

The National Assembly’s Legislation and Judiciary Committee, which was in charge of the confirmation hearing, held a voting session in the morning, and lawmakers of the Democratic Party (DP) and its ally Open Minjoo Party passed the report. Lawmakers of the People Power Party (PPP) did not attend the voting.

“We could not accept the opposition’s demand that another confirmation hearing be held,” said Rep. Park Ju-min, the DP's executive secretary for the committee. “We had no choice but to hold the voting today, and we waited for the opposition lawmakers for 10 minutes, but they didn’t show up. So we carried out the voting without them.”

Monday was the deadline imposed by President Moon Jae-in to send the report. Last week, Moon told the National Assembly to wrap up the confirmation process for Kim, as opposition lawmakers protested the nominee for his ethical lapses in his past.

Kim will be the 32nd minister-level official in this administration to take office without bipartisan support. 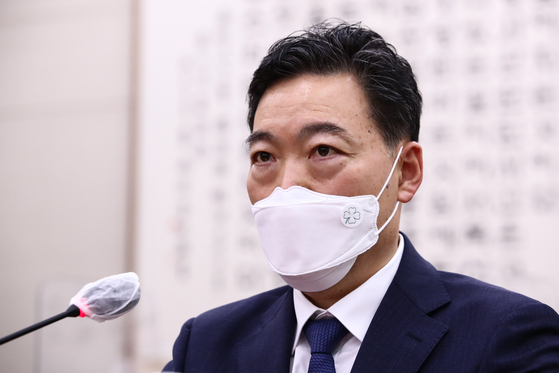 
The National Assembly held Kim’s confirmation hearing on Wednesday, but the ruling and opposition lawmakers failed to reach an agreement on his qualification. While the DP wants to end the process to confirm him, the PPP demanded that a new confirmation hearing be held to further scrutinize him.

The PPP’s spokesman, Rep. An Byung-gil, said Monday that the ruling party was ignoring the people by unilaterally voting to confirm Kim.

Moon nominated Kim to head the prosecution service on May 3. Kim, a former prosecutor, served as vice minister of justice from June 2018 through April 2020.

Over the past few weeks, the PPP protested Kim’s nomination, citing his alleged lack of ethics and possible violations of the law.

As a private lawyer, Kim represented bank executives involved in two large financial frauds just five months after resigning from his position of vice justice minister, which opposition lawmakers said was a violation of the Attorney-At-Law Act. The law says a lawyer who served in a government post is prohibited for a year from taking a case handled by his former office.

Lime and Optimus have been unable to return over 2 trillion won ($1.8 billion) in customer investments. Financial regulators have said they suspect the money is unavailable due to bad investments, Ponzi-like schemes and possible fraud. Prosecutors also investigated suspicions that operators of the funds lobbied key members of the Moon administration and the ruling party.

At the confirmation hearing, Kim said he had not defended the fraudulent fund operators. He, however, refused to clearly identify his clients, citing his duty as a lawyer to maintain confidentiality.

Unfit for the job (KOR)