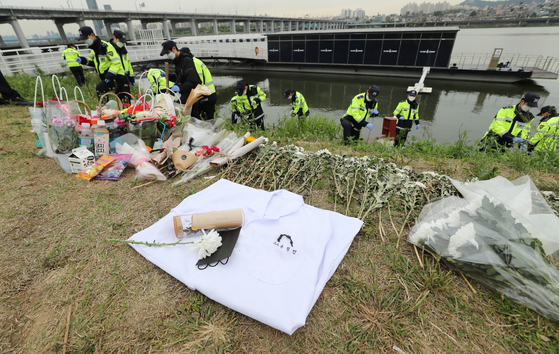 Police search for evidence on May 10 in the death of medical student Sohn Jeong-min, whose body was found floating next to a water taxi boarding platform by the Banpo Bridge. [NEWS1]


Police finally found the mobile phone of the friend of Sohn Jeong-min, a 22-year-old medical student who was discovered dead in the Han River on April 30, six days after he went missing from a riverside park in southern Seoul.

Sohn’s friend's phone has been a focus in the mysterious death, and may contain critical clues to how Sohn died.

According to Sohn’s friend, whose name remains undisclosed, the pair were drinking in Banpo Han River Park on the southern bank of the river starting shortly before midnight on April 24 and continuing for several hours.

Sohn’s friend said they fell asleep and when he awoke around 4:30 a.m. on April 25, Sohn had vanished. He claimed he thought Sohn had gone home, so he also left.

However, the friend returned home with Sohn’s mobile phone instead of his own, leading to a police search for the missing phone.

The missing phone was surrendered by a park service worker to the information center at the park at 11:30 a.m. on Sunday. Police said that the park worker found the phone on an unspecified date, and had kept it in his possession until Sunday for unexplained reasons.

The phone was out of battery power but in operable condition, according to police.

Police said they confirmed through telecommunications networks that the friend’s phone remained in the park area until at least 7:02 a.m. on April 25, when it ran out of power.

During the month-long period that the phone was missing, police conducted forensic analysis upon the phones of the friend’s family. They found no evidence that messages or photos had been deleted from the family members’ phones.

However, Sohn’s parents continue to raise suspicions about the friend and his family, who arrived in the park at 5 a.m. on April 25 to search for Sohn after he had gone missing.

In particular, Sohn’s parents have taken issue with the fact that his friend and his friend’s family only informed them of Sohn’s disappearance at 5:30 a.m.

Surveillance footage from the tunnel entrance to the park showed the friend’s family roaming the park on the eastern side of the Banpo Bridge.

The friend and his family released a statement through a lawyer on May 17 saying that he played no part in Sohn’s death and that he wished an end to the speculation surrounding the case.