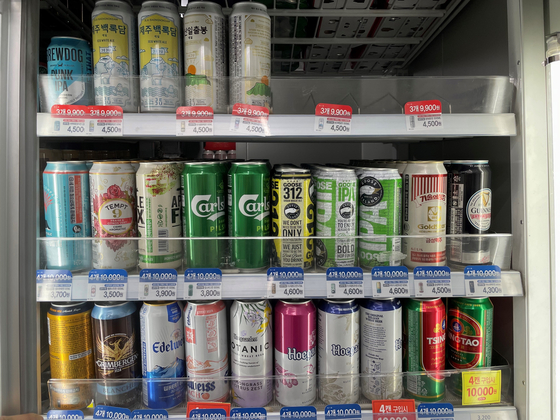 
Korea's craft beers are booming, with the help of fun collaborations and loosened regulations.

“I used to buy Kirin Ichiban or Asahi beer, but decided to try different craft beers because Japanese beers were yanked out of my convenience stores,” said a 35-year-old office worker living in Seoul. “They are tasty and the prices are reasonable. I can have a 500-millilitre [16.9-ounce] IPA for 2,500 won [$2.26], when it normally costs 8,000 won at pubs.”

Craft beers used to be available only in restaurants and pubs, but breweries have broken through the convenience store and big supermarket barrier. More widespread availability – not to mention a rise in people drinking alone due to the pandemic – has brought a huge boost to the business.

Craft beer is a term coined by the American Brewers Association in the 1970s. It refers to small, independent brewers – producing 6 million barrels or less – and making products with unique twists. In Korea, the term is loosely applied to small- and mid-sized liquor manufacturers, excluding big mass market brands such as Hite Jinro, Oriental Brewery (OB) and Lotte Chilsung Beverage.

Craft beers sold at GS25 stores made up 10.6 percent of beer sales in 2020, a 3.6 percentage point increase from the previous year. As of May this year, craft beers accounted for 13 percent of all GS25 beer sales.

According to the Korea Craft Brewers Association, sales of craft beer makers were estimated to be about 118 billion won last year, up 34.1 percent from the previous year's 88 billion won.

Last year’s tax revision bill was a big contributing factor. Korea changed its liquor tax system, levying tax based on the volume of beer sold, rather than an ad valorem tax on the cost of production.

Craft beer makers saw high taxes under that system as they had high production costs, due to their various beer types, despite small volumes.

Offbeat but fun collaborations also caught the public's attention. 7Bräu Gompyo Wheat Beer, a collaboration between flour maker Daehan Flour Mills and local craft brewer 7Bräu, sold 5 million units since its launch. Capitalizing on the retro trend in Korea, the beer echoes the look of a Daehan Flour Mills' bag of flour. Canned food maker Yoo Dong teamed up with Satellite Brewing to launch Whelk Beer in December last year. Although the name may strike customers as odd, the beer tastes nothing like the shellfish. The name signifies that it's a good pairing with golbaengi muchim, Korean spicy whelk salad.

More companies are jumping into the craft beer market – including some names that are big and only marginally connected with beer. Starting this year, companies are allowed to produce liquor under an original equipment manufacturer (OEM) contract, which means small breweries can outsource beer production to large companies with liquor manufacturing licenses. The microbreweries are positive about this. Kyochon F&B, a well-known fried chicken franchise, acquired Indulge Korea's craft beer division in May and is planning to develop their own craft beer to serve at stores.

Even convenience store chains such as GS25 and Emart24 are planning to acquire small liquor manufacturers to develop their own craft beer brands.