Seoul mayor Oh has one year left, but his plans go beyond

Seoul mayor Oh has one year left, but his plans go beyond 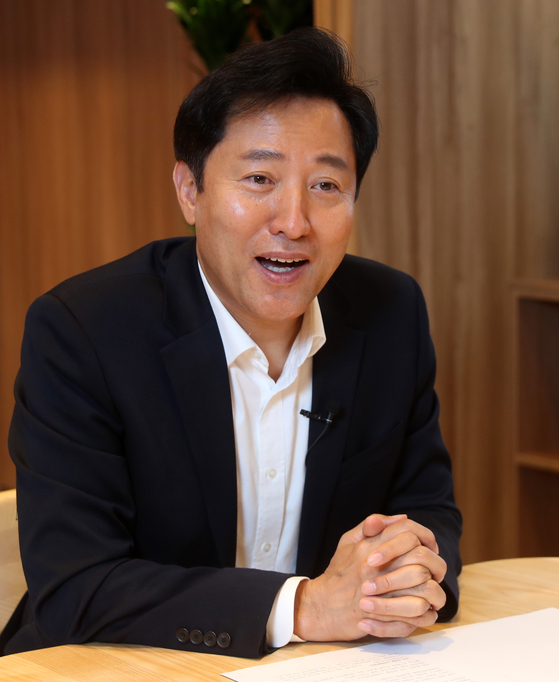 Seoul Mayor Oh Se-hoon speaks with the JoongAng Ilbo at his office in the City Hall on Thursday. [KANG JUNG-HYUN]


Seoul Mayor Oh Se-hoon has a busy year left ahead of him, as he will hold one of the shortest terms in office as the mayor of the capital city of Korea.

However, many of his policies encompass the next five years — intentionally.

“I am hoping that the people of Seoul will elect me as the mayor once again next year so that we can see these policies and programs through to the end,” Oh told the JoongAng Ilbo on Thursday.

His ambitious plans range from pilot programs for a type of basic income for the low-income families in the city and Covid-19 self-test kits, supplying of 240,000 new housing units in the city with hopes to stabilize the skyrocketing housing prices and fighting to win more support from a ruling party-heavy city council to churn out more programs and policies that will, Oh hopes, aid some return to normalcy in the people’s livelihoods despite the Covid-19 pandemic.

Oh sat down with the JoongAng Ilbo at his office on Thursday for his first interview since his inauguration last month, apart from short appearances on some TV programs.


Q. You’ve made it clear from day one in office that you will focus on Seoul’s housing policies. Can you tell us more?

A. Seoul has not added any more redevelopment areas since 2015, and even those that were once designated redevelopment areas were then scrapped during the administration of former Mayor Park Won-soon. We should have had some 10 to 20 new designated sites in the previous city administration [to balance out the supply and demand of the market]. The lack of new designations is partly why we are where we are today — a housing crisis. My administration intends to add 240,000 more housing units through 2025.


There are concerns that your intention to designate more areas in the city for redevelopment could lead to hike in housing prices.

How people think and make predictions about the housing market plays a lot into the ups and downs in the housing prices. The prices rise when people think there will be less housing units in the future. But the prices will fall if people think there will be more than enough housing units in the future. I think the recent measures announced by the city government to lower the threshold for new areas to be designated redevelopment zones will help bring down the prices.

One of the visible changes in the city is the revamping of Gwanghwamun Square. Do you intend to go through with the plan just as your predecessor had planned it?

The people of Seoul would agree that it’s not the best thing to have one mayor launch a project that his or her successor then abandons. Unless there is a strong consensus among the Seoulites that this project should not proceed as planned, I intend to continue it. That is a philosophy I intend to stand by for other city policies as well.


One of the legacies left behind by your predecessor is the enlarged funding for some civic groups, which some Seoulites have found to be rather excessive. What do you say to that?

I have reviewed the previous budget allotment of the city government, and have found some decisions made during the third term of the former mayor to be rather ineffective, and, yes, in some cases the budget allotted seemed rather extravagant. We are working on making reductions where needed.


Your party, People Power Party [PPP], holds a minority in the city council. How have you been communicating with the council members?

I’m trying to create meetings that are sporadic and not rigid, like breakfast meetings, where we can talk about different policies and share ideas. Just this morning, I had a breakfast meeting with 10 city council members in this room. I believe that the more we meet and talk, the more we will be able to reduce our differences. Cooperation with the city council will be key in implementing policies, because my party holds less than 10 seats at the [110-seat] council currently.


You pledged to run the city in cooperation with Ahn Cheol-soo, the leader of minor opposition People Party, once you were elected mayor. Are you in communication with Ahn regularly?

We are in regular communication through Kim Do-sik, deputy mayor for political affairs, who was appointed following a recommendation from Ahn. We have agreed to push through policies that we both see as sound, many of which are in the areas of education and after-school care for young children.


As discussions on candidates for the presidential election next year heat up, many are discussing you as a potential candidate. Your thoughts?

I have told those closest around me that I will not be running for the presidential election next year. All of the policies at the city government are currently being planned to be implemented through the next five years. I am hoping that the people of Seoul will elect me as the mayor once again next year so that we can see these policies and programs through to the end.


One of the rising stars among the conservatives is PPP Rep. Lee Jun-seok, who is running to be the party’s new chairman. One of your recent Facebook postings could be read as nuanced support for Lee. Is that correct?

My message on Facebook was not about supporting a specific candidate. I wrote it, after watching a policy discussion among the candidates, about my hopes that the next leader of the party will be someone who can transform the party to be a young and active one. In our previous [mayoral] election, we received a lot of support from people in their 20s and 30s, and I was hoping that the party will be able to continue to communicate effectively with the younger generation. I see a growing need for the party’s face to be younger.


What’s this social safety net fund that will be run as a pilot program by the city government?

It’s about supplying low-income families with a certain amount of basic minimum income in cash. It’s still in the planning stages for a pilot program. It’s different from what’s been proposed by other local governments such as Gyeonggi government’s basic income policy, which is to be handed out regardless of one’s income level. The purpose of the pilot program in Seoul is to help those registered for basic livelihood security to be able to re-enter the job force, because many of these people are afraid of losing their security once they find a job. The social safety net fund will encourage these people to find jobs and find ways to self-sustenance.

Public housing units to get a make-over