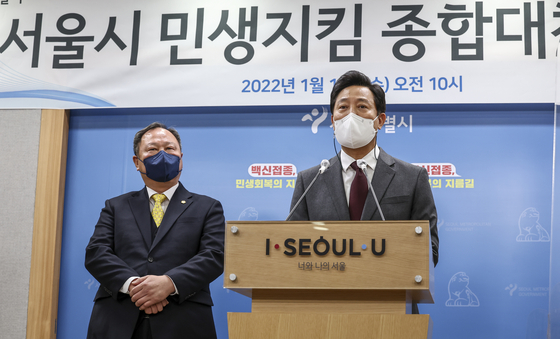 Seoul Mayor Oh Se-hoon, right, speaks during a joint press conference to announce a set of measures to protect the livelihoods of citizens in the capital. Standing on the left is Kim In-ho, chairperson of Seoul Metropolitan Council. [YONHAP]


Seoul City on Wednesday announced the largest set of measures yet to protect the livelihoods of its residents affected by the pandemic.

The Seoul Metropolitan Government said it set aside a budget of 857.6 billion won ($719.46 million) for various supporting projects after consultation with the Seoul Metropolitan Council. The city explained that the actual scale of support amounts to 1.871 trillion won when also including its rent assistance and gift certificate handouts.

Seoul will first offer 1 million won in cash to use toward paying rent to some 500,000 small business owners and self-employed people who were hit hard by the country's business restrictions. Small business owners with annual sales of less than 200 million won are eligible for the rent assistance. The city will start receiving applications from Feb. 7.

In addition, the city will give 3 million won each to 5,500 small businesses in major tourism sectors, and it will add 1 trillion won this year to its interest-free financial support policy, which received positive feedback from small businesses last year.

To vitalize consumption at local businesses ahead of the Lunar New Year holiday, which starts Jan. 31, the city will offer a total of 500 billion won in Seoul Love Gift Certificates at a 10 percent discount.

Seoul will also extend the 50-percent discount applying to water bills for small business owners, and waive up to 60 percent of rent for merchants in public shopping complexes in the capital.

Seoul City will provide emergency living expenses of 500,000 won to 250,000 workers categorized as "special employment" and freelancers who are not included in the government's compensation for losses. It will also provide 500,000 won each as a subsidy for job security to bus drivers and corporate taxi drivers, following a decrease in passengers during the pandemic.

The capital city is also expanding its public health resources in preparation for any further spread of Covid-19.

Making use of empty plots of land, the city plans to set up 100 Covid-19 hospital beds for the treatment of mild-to-moderate or moderate-to-severe patients, and expand the number of outpatient treatment centers from six to 10.

To address a shortage of personnel on site, an additional 150 staff members will be hired, and the wages for fixed-term nurses will be raised 43 percent compared to last year.

“[The new set of measures] is not yet enough to relieve the pain of small business owners who have been struggling to maintain their livelihood for a long time,” Mayor Oh Se-hoon said. “We will make sure the support is provided as swiftly as possible without interruptions, centering on the blind spot of the government's loss compensation.”