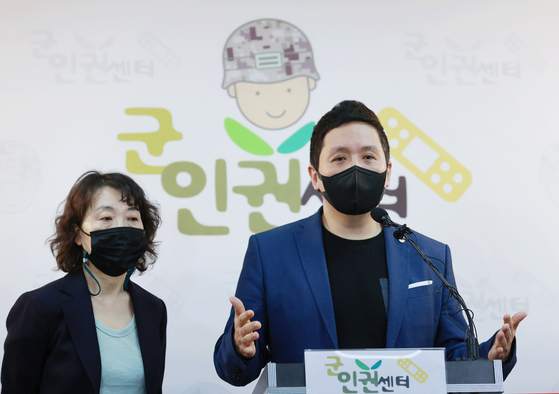 
Only two days after an Air Force officer took her life following unresolved sexual harassment by a superior, the force was roiled again Wednesday by allegations that female Air Force members were secretly filmed without their consent by a male military policeman and that the unit failed to take action to protect the victims.

The Military Human Rights Center, a nongovernmental organization which advocates for soldiers who have suffered abuse or ill-treatment in the armed forces, said at a press conference Wednesday that a male military policeman, who is a staff sergeant on the base, was caught and reported for trespassing into a women’s dormitory in the 19th Fighter Wing.

Following the incident, which happened in early May, investigators discovered a large trove of footage of Air Force women, filmed without their consent, in various states of nudity in a USB and mobile phone belonging to the sergeant.

Videos and photographs of the victims were organized into folders bearing the women’s names in the USB.

The Military Human Rights Center said that it had received tip-offs from various sources about the sergeant in question. The center added that the extent of the distribution of the videos and photos remained unclear, although the footage had been saved and stored for an unspecified long period of time before the man was caught.

According to Kim Sook-gyeong, head of sexual violence counselling services at the center, up to six victims have been confirmed, but “other female soldiers are trembling in fear that they, too, might have fallen victim.”

The center also raised allegations that the unit failed to punish the sergeant and protect the women after his behavior was exposed.

The unit only transferred the sergeant, a month after he was exposed, claiming that there were no other units which could take him and he is due to be released from active duty in August anyway.

According to the center, military police in the unit also asked the victims to “be understanding because he, too, has human rights” and that they could rest easy because “the perpetrator is being educated.”

Center chief Lim Tae-hoon criticized the military police in the unit for not arresting the offending sergeant and “protecting their own.” Lim said the Air Force was proving itself “unreliable for victims” by “not even separating victims from perpetrators.”