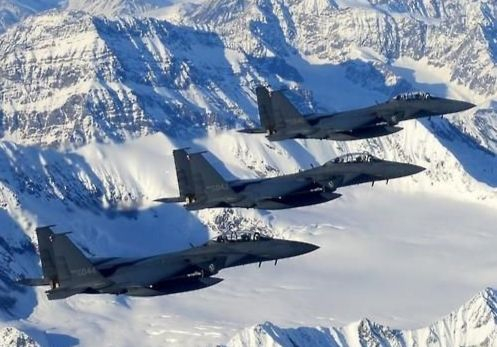 
For the first time in three years, the Korean Air Force is planning to participate in a U.S.-led multinational air force exercise next month, U.S. military officials said Tuesday.

The Korean Air Force is expected to be joined at next month’s Red Flag exercise by the Japanese self-defense air force, “enabling the exchange of tactics, techniques and procedures while improving interoperability with fellow Airmen,” the U.S. Seventh Air Force said in a press release on Tuesday.

Held up to four times a year, the upcoming Red Flag-Alaska exercise will take place at Eielson Air Force Base and Joint Base Elmendorf-Richardson in Alaska from June 10 to 25 and involve around 1,500 service members and 100 aircraft.

Since the exercise's inception, thousands of people from all four branches of the U.S. military, as well as the armed services of over 20 countries, have taken part in the Red Flag-Alaska exercises.

Speaking on the condition of anonymity, an official at the Korean Air Force said, “We are considering taking part in the exercise, and the final decision is expected to be made soon. We are closely monitoring related circumstances, such as the Covid-19 pandemic.”

Following the crash of a KF-16 in 2019, all KF-16 aircraft were grounded and subject to a safety review. As a result, Korea’s participation in the 2019 Red Flag-Alaska exercise was limited to sending two C-130 transport aircraft and 50 airmen.

Next month’s Red Flag exercise would mark the first major combined military exercise among Korea, Japan and the United States under the administration of U.S. President Joe Biden, who has called for the strengthening of defense ties between Seoul and Tokyo to counter growing threats from North Korea and China.

The Red Flag-Alaska exercise was launched in 1975. Originally called Cope Thunder, the exercise provides opportunities to integrate various forces in a realistic threat environment, according to the U.S. Seventh Air Force.