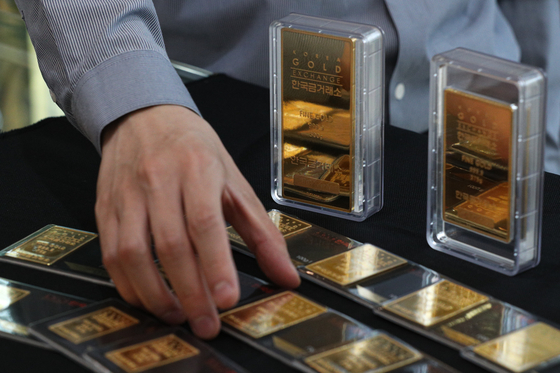 With the growing fear of inflation, wealthy people are rushing into safe haven assets — gold and the dollar.

A 68-year-old man, a CEO of a medium-sized company in Korea, ran to the Korea Gold Exchange in central Seoul to purchase 18 gold bars worth 1.4 billion won ($1.26 million) in early May.

“When the economy remains unstable, nothing is better than gold,” he said. “I have this strong conviction that the gold prices will jump if I hold for a long time.”

A total of 1.1 trillion won of gold was sold between January and May, according to the Korea Exchange. That’s 60 percent of the total spending on gold full-year 2020, which was 1.82 trillion won.

In times of uncertainty, what wealthy people consider most important is how to keep their assets safe. They tend to hold more cash and invest in physical assets, according to Kim In-eung, manager at Woori Bank's sales team.

“Since the beginning of the year, many customers have been selling their shares and funds to take profits,” said Ju Myung-hee, head of Hana Bank’s Asia Seonsuchon PB Center in Songpa District, southern Seoul. “People who own a large amount of assets keep some 10 percent of their assets in safe havens like gold and dollars.”

With the high demand, gold prices are skyrocketing. The falling prices of cryptocurrencies also helped the rise. People once called bitcoin “digital gold” as the prices soared so quickly and sharply.

“With the increasing price volatility of bitcoin, people's money moved to gold, which is a traditional hedge,” said Kim So-hyun, an analyst at Daeshin Securities.

A businessman in Seoul, 70, who has 5 billion won of financial assets, recently deposited some 100 million won in his dollar account.

“The value of dollar will rise further with growing concerns over inflation and tapering,” said the man.

Balance in dollar accounts at four commercial banks — KB Kookmin Bank, Shinhan Bank, Woori Bank and Hana Bank — totaled $55.47 billion as of May, up 13 percent compared to the end of last year.

The local currency closed at 1,113.6 won against the dollar, up 0.3 won from the previous session's close. Compared to March 10, the lowest point of the year, it’s up 2.6 percent.

“It is likely that the United States, the country with the world’s fastest recovering economy, will move toward tapering soon,” said Min Gyeong-won, an economist at Woori Bank. “The value of local currency is expected to fall as low as 1,140 won by the end of the year.”