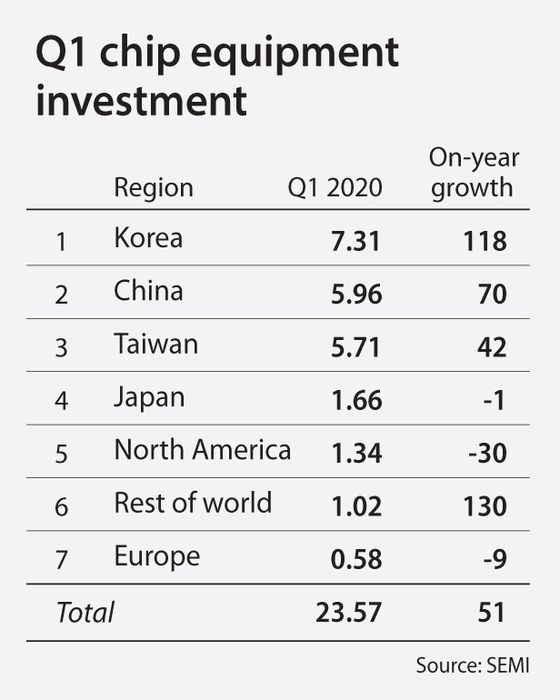 Korean chip companies spent big-time on equipment during the year’s first quarter, according to SEMI, an industry association.

Between January and March, semiconductor equipment billings by Korean chipmakers totaled $7.3 billion, a 118 percent increase from the same period last year. Korea was the top spender on chip equipment during the period.

This was the largest on-year increase among top chip making countries. In that comparison last year, Korea was third behind Taiwan and China.

Korea accounted for 31 percent of all chip equipment purchases globally in the first quarter. The country is home to Samsung Electronics and SK hynix, global leaders in the memory chip market.

Both companies have been ramping up investments to expand capacity. In February, SK hynix completed its M16 factory in Pyeongtaek, Gyeonggi, including installation of production equipment. M16 is the company’s largest factory to date and is the first to contain state-of-art extreme ultra violet (EUV) equipment.

Samsung Electronics is expanding capacity at its Pyeongtaek factory complex. The complex’s third factory, P3 is being built and is supposed start mass production in late 2022. Reportedly, P3 may cost 30 to 50 trillion won ($44.9 billion).

China came in second, investing $6 billion in chip equipment between January and March, a 70 percent rise on-year. Last year it was also No. 2.

Japan, North America and Europe saw investments in chip equipment drop on year. The decline in North America, in particular, was stark: a 30 percent drop from the same period last year.