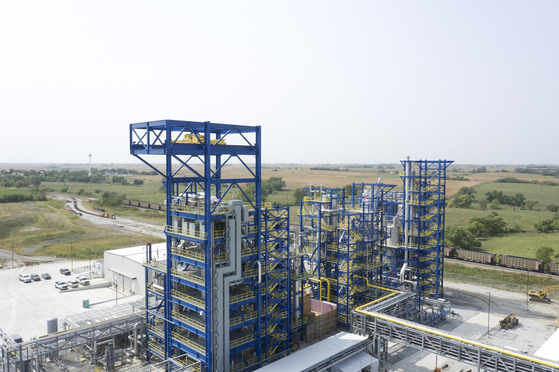 The investment unit of the SK Group said Thursday it participated in Monolith’s latest round of funding as lead investor.

Lead investors normally take the largest stake. SK Inc. did not disclose its stake in Monolith Materials, citing a confidentiality agreement. An SK Inc. executive will be given a seat on Monolith’s board.

According to SK, Monolith Materials is the first U.S. manufacturer to produce “green hydrogen” on a commercial scale. Green hydrogen refers to hydrogen produced through carbon-free methods, as opposed to so-called gray or brown hydrogen methods that use combustible fuel.

Founded in 2012, Monolith’s main technology is the ability to convert natural gas into hydrogen using renewable energy. Its first commercial-scale production facility in Hallam, Nebraska, was completed last June. The latest round of investments in which SK took part will be used to expand the Nebraska plant.

NextEra Energy Resources, another player in the clean energy field, participated in the consortium with SK Inc.

Last year, SK Inc. announced an aim to have a full hydrogen supply chain that leads from production to distribution and retail by 2025. in January, the company invested $1.6 billion in New York-based Plug Power, a leading provider of hydrogen fuel cells.

SK Inc. said it hopes the investment in Monolith would help it achieve its goal of producing 280,000 tons of hydrogen per year by 2025.

“SK recognizes the critical role hydrogen plays in alternative energy sources, and we are encouraged by Monolith’s technology that advances clean hydrogen production.”