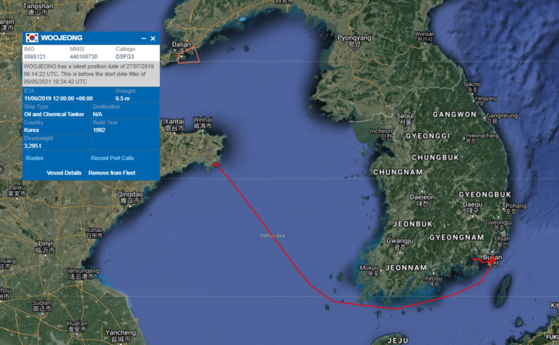 
North Korea obtained two new oil tankers for its smuggling operations last year in evasion of international sanctions, in addition to another vessel in 2019, according to an analysis by Washington-based think tank the Center for Strategic and International Studies (CSIS).

The UN Security Council in 2017 prohibited the "direct or indirect" sale or transfer of any new or used vessels to North Korea without its prior approval.

North Korea's maritime fleets working to smuggle coal, oil, luxury goods and military equipment have been "a key component of Pyongyang's sanctions evasion methods for years," according to the report.

Two of the three vessels, the Sin Phyong 5 and Kwang Chon 2, were previously owned by South Korean companies. They made their way to North Korea from South Korean brokers to individuals or companies in China.

These vessels have also been mentioned by the UN Panel of Experts for their roles in conducting ship-to-ship transfers of petroleum products, and the report noted that this indicates that North Korea "is quick to put newly acquired tankers to work in its illicit oil import business."

The Sin Phyong 5's last transmission was on July 27, 2019, according to data from the Pole Star Global maritime tracking platform. The vessel, previously owned by a Busan-based South Korean company Young Sung Global, was formerly called Woojeong and sailed from Busan in South Korea to Wangja Bay in northeastern China.

The report points out that it is "not surprising" that the oil tanker has not broadcast its location since its transfer to new owners because most North Korean tankers "only sporadically broadcast their locations, if at all," despite the illegality and maritime safety risks of this practice. Such a technique is so common among North tankers that it is often an indicator that a vessel has been acquired by Pyongyang, it added.

The Kwang Chon 2 joined the North Korean tanker fleet in November 2019 and was observed delivering oil to North Korea's Nampo port in South Pyongan Province on 10 different occasions before this date, according to the report.

The report states, "Whether or not the South Korean brokers breached resolutions may rest on what due diligence they conducted into the China-based buyers, who clearly also broke UN resolutions themselves."

The other vessel obtained by North Korea in 2020, the Wol Bong San, was previously Sierra Leone-flagged and was transferred through the Baili Shipping and Trading, a Hong Kong-based company linked to North Korea's coal and oil smuggling networks and its illicit weapons trade. It is linked with the case in 2016 in which Egyptian authorities seized 30,000 North Korean rocket-propelled grenades from the Jie Shun bulk freighter after being tipped off by U.S. officials.

The report added that the company and its owners "have been tied to weapon smuggling, coal shipments and oil transfers," along with the latest vessel transfer, but it has never been sanctioned by the United Nations.

In all three recent vessel transfers, the "common denominator was agents acting in China," North Korea's largest trading partner, "which likely does not bode well for any improved enforcement" of the UN restrictions, the report noted.

Beijing's interest in abiding by North Korea sanctions resolutions "is normally correlated with the state of relations with Washington, and the fallout of the pandemic combined with a new U.S. administration may keep eyes away from the nitty gritty of Pyongyang's ever expanding sanctions evasion toolset," it added.

A Seoul Foreign Ministry official told reporters Thursday in response to reports of possible sanctions evasions by South Koreans, "Our government's policy is to faithfully implement UN Security Council resolutions in close cooperation with the international government. The government is closely monitoring any evasions of Security Council sanctions, and is currently confirming related facts and trends."