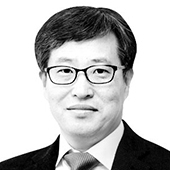 
Ducklings follow the first moving object they see after hatching, and they accept it as their parent. This is the effect of “imprint,” which is permanent. The period for this extraordinary learning varies with animals. It lasts for 36 hours for ducks and 48 hours for geese.

Such a decisive moment for the ruling Democratic Party (DP) was the April 7 parliamentary elections last year. After the need for disaster relief arose in the face of the pandemic, the DP pressured the government to expand the scope of the support to include all Koreans, rather than just a certain percentage of them, and snatched a landslide victory against the opposition in the election. The ruling party won a whopping 180 seats in the 300-member Assembly.

When the need for more relief arose couple of months later, the DP backed down and distributed it selectively. Asked whether the shift represents “a lack of consistency,” Rep. Han Jeoung-ae, chair of the DP’s policy committee, admitted that the universal payouts were a part of the ruling party’s strategy to win the legislative election.

Sweet memories of an easy election triumph with a showering of cash from state coffers still linger just like the first imprint on ducklings. The victory was simple too. On such tricky issues as the retroactive compensation for business losses of the self-employed, the DP was unassertive, citing its concerns about “duplicate assistance, fairness and problems with calculating their exact damages.” But the party has turned very aggressive on disaster relief for all. As soon as President Moon Jae-in mentioned the need for additional fiscal input, the DP jumped on the bandwagon as the idea of a universal handout did not create any headaches for the party.

The government and the DP do not care about the snowballing fiscal deficit hovering at 1000 trillion won ($896 billion) now. But they should be careful with the timing and way of releasing the relief funds. With a long way to go before Koreans reach herd immunity by November — the deadline set by the government — pent-up demand is recovering fast.

Raising its projection for growth this year to 4 percent, the Bank of Korea and suggested the possibility of raising its benchmark rate citing inflationary pressures. Consumer prices increased 2.6 percent in May on year — the largest gain for the month since 2012. The market is heating up at an alarming speed. To be sure, there is a plethora of deficit-ridden enterprises struggling to survive. But their financial crisis should be addressed by selective relief based on precise diagnosis and prescription, not universal give-outs.

Despite the need for expansionary fiscal policy, there are worries about its side effects. A case in point is the United States, which has started implementing $6 trillion of fiscal stimuli. Lawrence Summers, president emeritus of Harvard University and former Treasury secretary, and Olivier Blanchard, a senior fellow at the Peterson Institute for International Economics and former chief economist at the International Monetary Fund, both warned about the possibility that the Biden administration’s gargantuan stimuli package could trigger dangerous inflation. In the past, the two experts have advocated generous government spending for the economy to rebound.

Countries are weighing when it will be the best time to stop expansionary fiscal policies. Korea is going in the opposite direction. It is pushing for a super-sized supplementary budget amounting to 30 trillion. Interest rates of bonds have started rising — slowly but steadily. If the administration opts to issue government bonds to fund the budget, it will precipitously devaluate them and deepen concerns about higher interest rates.

The DP claims there is nothing to worry about as the government is supposed to get more tax revenues this year. But that is the money the government squeezed from a number of homeowners whose apartment prices soared thanks to the government’s real estate fiascoes. It is also the money a multitude of private companies earned after fierce competition at home and abroad. The government must not squander the money.

The populist government’s attitude is unfathomable. If there are some revenues left in state coffers, they should be used wisely for the victims of Covid-19, such as mom-and-pop store owners who suffered huge losses by faithfully following the government-enforced merciless social distancing rules, the underprivileged, and the young still struggling to find a job.

Koreans are tired of such benevolent offerings of cash with savvy excuses ahead of elections. The effect is also dubious. The fourth round of relief the government doled out before the April 17 mayoral by-elections in Seoul and Busan did not affect the results of the election at all. Park Young-sun, a DP candidate for Seoul mayor, promised a universal 100,000-won cash handout for each citizen, but the idea was overwhelmingly turned down by voters. Could the DP help win the presidential election on March 9, 2022 by playing the same tune again? Probably not.

Localities disburse money they don't have ahead of elections