Young politicians of the Justice Party hold a press conference on May 30 to announce their plan to abolish the minimum age requirement to run in the presidential election. [NEWS1]


Young politicians are demanding the Constitution's minimum age requirement to run for presidency be abolished.

In Korea, anyone younger than 40 years old is not eligible to run in the presidential election. But these days, young politicians in their 20s and 30s are increasingly making their way onto the political stage. “Citizens who are eligible for election to the National Assembly, and who have reached the age of 40 years or more on the date of the presidential election, shall be eligible to be elected to the presidency,” Clause 4 of Article 67 of the Constitution states.

Three politicians of the Justice Party, including Reps. Ryu Ho-jeong and Jang Hye-young, held a press conference on May 30 that the clause must be abolished from the Constitution. They said the minimum age requirement is discriminatory and unfair.

Their argument came as a major generational change is taking place in the country's political arena. In last year's general elections, candidates in their 20s and 30s won 11 seats out of the 300-member National Assembly. That number is higher than ever before. In 2016, two candidates under 40 were elected, and in 2012 nine politicians in their 30s were elected.

In the upcoming chairmanship race of the largest opposition People Power Party (PPP), Lee Jun-seok, 36, is enjoying the highest popularity as shown by the polls, possibly due to pledges to reinvent the conservative party to represent more younger voters. 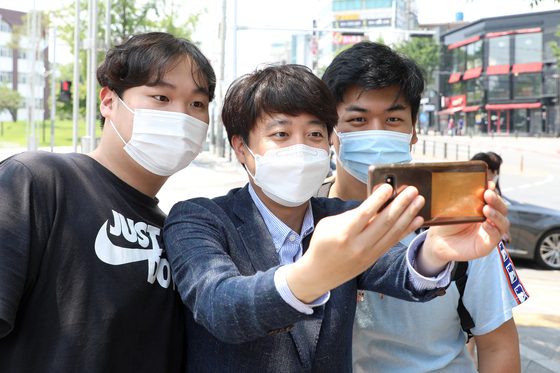 In this file photo, Lee Jun-seok, frontrunner of the People Power Party's chairmanship race, center, takes a photo with university students of Kyungpook National University in Daegu on May 24. [NEWS1]

This is not the first time that the minimum age requirement to run for presidency has been challenged. President Moon Jae-in in March 2018 proposed a series of constitutional amendments, and abolishing the age limit was one of the suggested changes. Prominent ruling Democratic Party (DP) politicians such as Lee Nak-yon, Park Yong-jin and Kim Du-kwan have also proposed to abolish the limit.

The clause was included in the Constitution in 1962, and young politicians such as Kang Min-jin, head of the Justice Party’s youth division, argued that then-President Park Chung Hee, who was in his 40s at the time, introduced it to exclude his competitors in their 30s.

Experts, however, said Park was not the inventor of the age limit for presidency. The law governing the presidential and vice presidential elections, established in 1952, included the minimum age requirement of 40 years old.

“At the time, the Confucian belief that a president of a country should be at least 40 years old was dominant in our society,” said Professor Chang Young-soo of Korea University’s School of Law. “If it were a legacy of the Park regime, it would have been taken out when the Constitution was amended in 1987, but no one challenged it.”

In fact, the minimum age requirement to run in a presidential election was once lowered to 30 years old when the Constitution was amended in 1980 under the presidency of Chun Doo Hwan. It was raised again to 40 in 1987.

The minimum age requirement also exists in other countries. According to Article 2 of the U.S. Constitution, the president must be at least 35 years old. In Germany, the age requirement is 40.

“At the early stage of democracy, tax payment records, gender and age were used to decide eligibility to become a president,” said Kim Jong-cheol, professor of Yonsei University’s School of Law. “Age limits are being lowered in the Western countries, but many still keep it.”

Some law experts are against keeping the minimum age requirement. “Voters must decide whether a candidate is fit or not. It is unreasonable to limit age,” Kim said.

Professor Lim Ji-bong of Sogang University’s School of Law, agrees. “The clause of banning a candidate from running in the election limits voters’ rights,” he said. “Even if the age limit is lowered, the standard will be arbitrary, so it must be completely lifted.”

Despite growing demands among politicians and scholars, lawmakers said amending the Constitution to abolish the clause alone won’t be easy.

“We agree with the intention to change the Constitution to reflect the young peoples’ opinions,” Rep. Ko Yong-jin, spokesman of the DP, said May 30 in response to the young lawmakers’ press conference. “There are some steps we must take for constitutional amendment, so we need to further discuss this matter.”

Other lawmakers are skeptical of amending the Constitution only to lift the age limit.

“We fully agree with the intention, but changing the Constitution to remove only that clause is unrealistic,” Rep. Suh Bum-soo of the PPP told the JoongAng Ilbo. “Holding a national referendum to amend the Constitution is costly, and politicians will say they want to take the opportunity to make other changes.”

In his Facebook posting, former DP Chairman Lee Nak-yon also said Friday that lifting the age requirement can be discussed when other changes in the Constitution are discussed, dismissing a possibility of a single amendment targeted to abolish the age limit.