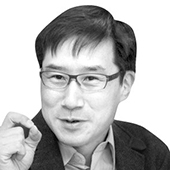 Chang Ha-sok
The author is a professor of history and philosophy of science at the University of Cambridge.

Italian physicist Macedonio Melloni was curious and started a thorough experiment in 1846. On a night of a full moon, he used a large magnifying lens with a diameter of 1 meter and focused the moonlight. He shined the intensified moonlight on a very sensitive thermometer. The thermometer was connected to multiple thermocouples, an invention of Melloni. Through the experiment, he concluded that the moonlight, too, had heat, through very weak.

It may have seemed meaningless for ordinary people. But Melloni’s experiment of focusing moonlight was a part of important research on the nature of radiant heat. Irish physicist John Tindal continued the research and studied how radiant heat penetrates in different gases, using the thermometer that Melloni invented in his experiments. Tindal discovered that carbon dioxide absorbs radiant heat very well. This, also, may sound like some useless knowledge, but it’s not. He effectively discovered the greenhouse effect, the main cause of global warming.

There are many examples of pure science research inspired by curiosity without a specific pragmatic purpose yet resulting in a significant impact on our daily lives, from semiconductors to genetic engineering to nuclear bombs. Electromagnetism, which is the foundation of modern technology, began from Michael Faraday’s research of playing with magnets, cells and coils. Until then, magnets had little use other than for compasses. But in Faraday’s curious hands, magnets became a tool that made us learn the mystery of nature. He was not someone who played with magnets for leisure. Coming from a poor family, he did not receive a secondary education. He studied science on his own, reading books he was binding as he worked as an apprentice at a bookbinder. He was someone who had a desperate desire to learn more.

Many scientists in the old days studied independently. But now that we know the pragmatic value of science, governments around the world make investments in science. But the challenge of government policy is that it is hard to predict what research in the pure sciences will lead to practical applications. Some insist that investment should be concentrated in the technological fields with relatively visible and feasible goals, but the problem is that truly new technologies cannot be developed without wide and deep scientific knowledge.

However, it is too simple to assume that developing pure science first will lead to various technological applications. Sometimes, existing scientific knowledge is applied to develop technologies. But in many other cases, very basic scientific concepts and theories are found in the process of pursuing technological advancement. Today’s pure scientific research is impossible without the backing of advanced technology. Think about the gigantic particle accelerator or the Hubble space telescope. From life sciences to theoretical physics, all fields of study are interconnected in a complex network, backing and accelerating one another.

When building a network of knowledge to support rich human life, not only natural sciences and engineering but also social sciences and the humanities need to be included. In the universities of many countries, including Korea, liberal arts departments are in jeopardy and get less government funding. It is truly a shortsighted move. For example, the economy in the future is said to be dependent on artificial intelligence, but it should not be misunderstood as something done only with computers.

In order to properly develop and make it useful to human life, we need to first understand what “intelligence” is, how AI and humans communicate and what ethical issues will arise due to AI. In other words, various liberal arts, such as philosophy, psychology and linguistics, are needed to properly apply AI. Investments aiming at immediate outcomes reach their limit soon. For the future far ahead, the only solution is to support scholars in every field to explore as much as they want.