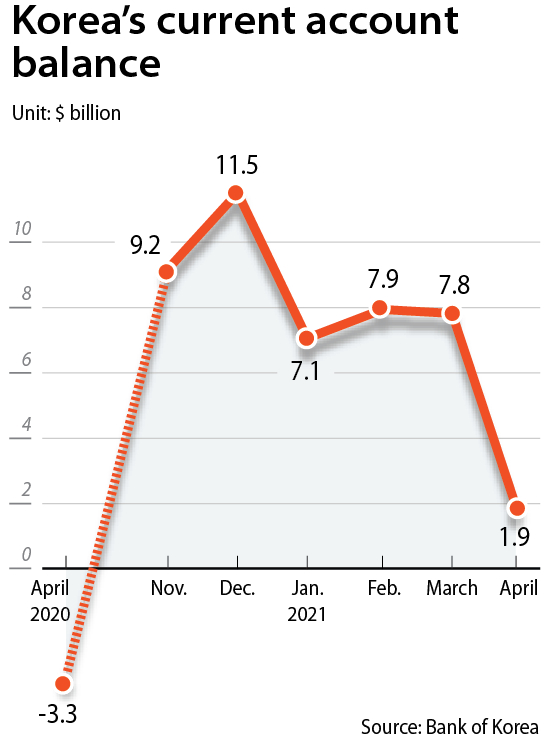 Korea reported its 12th current account surplus in a row in April, $1.91 billion, thanks to buoyant exports.

The surplus was something of a surprise as April is the month companies pay dividends, many to overseas investors, which has an impact on the current account, the broadest measure of cross-border trade. It was the first such surplus in April in three years.

According to a preliminary report from the Bank of Korea on Tuesday, the current account recorded a surplus of $1.91 billion compared to a deficit of $3.3 billion in the same month last year. Last year's deficit was particularly large due to the effect of the pandemic on Korea's exports.

Both exports and imports of goods increased in April, but exports grew faster.

Exports in April increased 46.9 percent year-on-year to reach $52.17 billion. Exports of cars, chemical products and semiconductors increased thanks to recovery from the pandemic worldwide, according to the central bank. Exports of petroleum and steel products also bounced back.

Imports in the same month amounted to $47.61 billion, up 36.7 percent on-year. The increase in imports reflected increased prices of raw materials and facilities investment by local chipmakers, which involves imported equipment.

The services account showed a $10 million surplus in April, compared to a $1.5 billion deficit in the same month a year earlier.

Among the components of the services account, transport increased by roughly 20 times from $40 million in April 2020 to $810 million this April.

Recovery from the pandemic has boosted trade and forced up shipping rates. The Shanghai Containerized Freight Index, a major ocean freight index, jumped 232 percent in April compared to a year earlier, to reach 2,830.

Korea's primary income account, which reflects wages as well as interest income and dividends, recorded a $1.95 billion deficit, largely due to dividend payouts to foreign investors, in April, down 13.3 percent compared to April last year. Income on equity, or income from stock dividends, in April showed a deficit of $3.21 billion, up 6.6 percent from a year earlier.