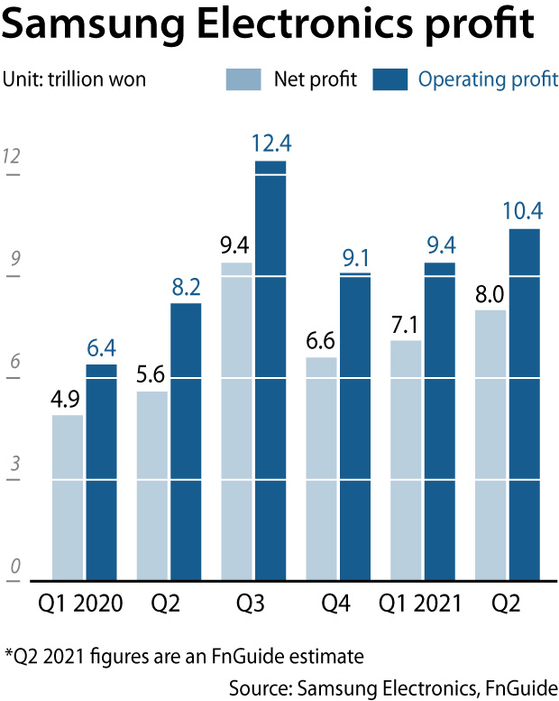 Samsung Electronics is expected to have a strong second quarter due to healthy memory chip demand and solid pricing.

Net profit in the second quarter is forecast to be about 8 trillion won ($7.2 billion), up 44 percent on year, according to FnGuide.

The optimism comes as dynamic random access memory (DRAM) prices rise. In contracts signed by Samsung Electronics for DRAMs in the United States, prices are up 20 to 25 percent on quarter, according to Samsung Securities.

Previously, the increase was forecast at 10 to 15 percent.

The Samsung Electronics Austin plant, which shut in February due to a severe cold snap in Texas, resumed operations at the end of March.

Rising demand for computers and laptops by companies is also a contributing factor as many people are going back to the office.

The demand for computers at companies replaced the demand of individual customers, which was high when many companies allowed their employees to work at home due to the pandemic, Credit Suisse's March report said.

“DRAM demand in the third quarter will increase due to corporate orders,” read the report. “Average DRAM prices are expected to surge even higher in the future.”

“The memory chip market is a seller’s market,” said Kim. “Samsung Electronics will experience a significant profit increase in the second half of this year.”

“All production plants were in full operation from May,” said Jung Chang-won, head of Nomura Securities’ Equity Research Center. "Although DRAM and NAND flash memory prices fell in the fourth quarter last year and the first quarter of 2021, they’re rebounding, enjoying a super cycle until 2023.”