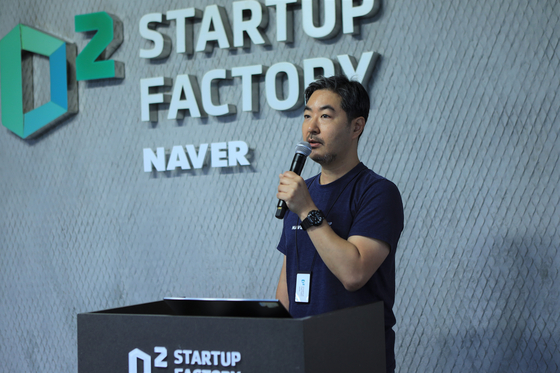 
Naver will set aside a floor in an office building in Pangyo, Gyeonggi, for tech startups it invests in.

D2SF is Naver’s in-house accelerator. It invests in business-to-business (B2B) start-ups that sell technology or services for corporate clients. Unlike other venture capital companies or accelerators, D2SF -- short for D2 Smart Factory -- invests Naver’s money only.

“Six years ago when Naver first started seed-investment in tech start-ups, there weren’t that many to invest in,” said Yang Sang-hwan, D2SF's leader, during an online press conference Tuesday celebrating the company's sixth anniversary. Yang has headed D2SF from the start.

“Today, we’re seeing many more potential teams,” he added, "and I think in the next two to three years, there will be a significant deal [M&A] that could be a role model for other players."

This year, D2SF will do a similar level of investing in start-ups as last year, or possibly more, Yang said. In 2020, the company funded 22 start-ups.

More than half of the start-ups D2SF invested in developed artificial intelligence (AI) technology. Some were acquired by Naver or worked in developing autonomous driving technology or AI data analysis with the company’s affiliates.

“We always have the possibility of an M&A in mind when we select start-ups for funding—when it could be possible and in what way the team could create synergy with existing Naver services,” said Yang.

“Naver is heavily investing in shopping or webtoons at the moment so I’m thinking they could be fields where Naver will spot an opportunity among our teams.”

According to a survey D2SF conducted last year, the No.1 idea start-ups had in working with the Naver affiliate was the potential to partner with the portal in the future. In fact, seven among 10 D2SF-funded teams were in talks with Naver to adopt their technology for existing services, Yang said.

“One floor of our second headquarters will be dedicated to start-ups,” he said, referring to a new building that’s being built this year. Naver earlier announced that the building will be jammed with state-of-art technology from self-driving robots to AI-embedded offices.

“The space will be offered to teams that can fully make use of the technology there as a test bed.”