Naver to stop ranking news stories by number of views

Naver to stop ranking news stories by number of views 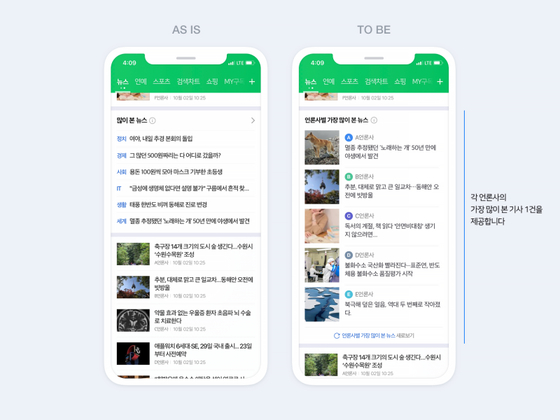 Naver unveiled its new layout for the news section on the mobile app, which will no longer have the list of "most-viewed" news. [NAVER]


Naver has decided to scrap the list of "most-viewed" news articles from its mobile app.


The portal site had been offering a list of the most-viewed news articles in different sections — politics, economy and society — based on the number of views or comments.

Instead, it will use an artificial intelligence (AI) algorithm to choose which articles are shown to users on the landing page. The company has been developing its news recommendation algorithm to consider qualitative standards like relevance, popularity and the viewing behavior of other users, rather than simply relying on numbers.

“The decision came as news consumption has been diversified and people are developing strong personal preferences for news brands,” said an uncredited post on Naver's official blog. “We will apply this to mobile news first and then reform the PC news service afterwards.”

After the overhaul takes place, news items that are the most widely viewed will not necessarily show up on every user’s newsfeed. Naver’s intention is to move away from showing the same lists to all of its users, regardless of their personal preference. The change is in line with Naver’s emphasis on "diversification over concentration.”


In April, Naver changed news that appears on its landing page, prioritizing news from media outlets that the user has subscribed to. This won't change, but users will be able to access the AI-curated list with a simple swipe to the left.

“After we implemented the subscription and AI suggestion services, news consumption has become much more diverse,” said Naver.

According to the portal, the number of articles with more than 100,000 page views has gone down by 24 percent since the change. The company's analysis shows that page views are now spread across a wider range of articles instead of being focused on a few.

Naver is also removing a section from its main page which shows the most popular story in each section. Instead, it will show popular stories specific to different media outlets, randomly selected from the 71 media outlets Naver's news service is partnered with.


Naver believes this will be fairer to the media outlets offering articles to its platform, since they each now have a one in 71 chance of showing up on users’ mobile news feeds.

Naver is also reinforcing the customization of news feeds.

Since October 2017, Naver has been displaying news on its landing page organized based on the media organizations that users subscribe to.

While Naver has been emphasizing its AI algorithm after a series of scandals over the manipulation of news stories rankings, it remains to be seen if the new system is actually better in terms of fairness and credibility.