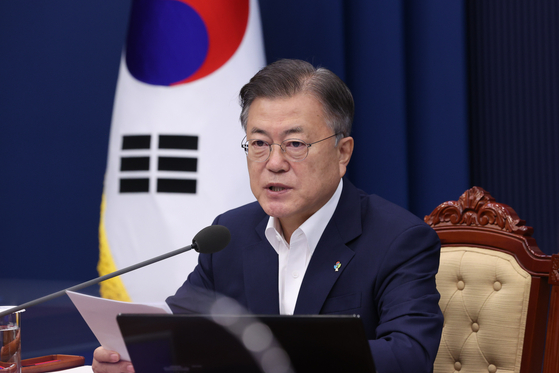 President Moon Jae-in speaks at the cabinet meeting on Tuesday at the Blue House. [YONHAP]


Anticipation grew Tuesday that a possible breakthrough in Korea-Japan relations may be seen when President Moon Jae-in participates in the upcoming Group of 7, or G7, summit in Britain.

Moon will attend the summit in Cornwall, England — the first major in-person multilateral summit since the outbreak of the Covid-19 pandemic — as a guest. Although Korea is not a member of the club attended by the world’s most industrialized economies, Moon and the leaders of Australia, India and South Africa were invited to the three-day event, scheduled to start Friday.

Other participants of the summit include U.S. President Joe Biden and Japanese Prime Minister Yoshihide Suga.

“This G7 summit not only signifies the resumption of the multilateral summit, which has been stopped since the Covid-19 pandemic, but also an opportunity to have active bilateral summit diplomacy with major countries,” Moon said in his opening remarks for the cabinet meeting on Tuesday.

The G7 summit will be Moon’s first face-to-face encounter with Suga. The last Korea-Japan summit took place in December 2019 in China on the sidelines of the Korea-Japan-China trilateral summit, and Moon’s Japanese counterpart at the time was Prime Minister Shinzo Abe.

While there was no announcement that Moon will have a separate meeting with Suga, speculation grew in the diplomatic community that they may try to reconcile the worsened Korea-Japan relations. The United States also left open a possibility of a trilateral summit among Moon, Biden and Suga.

"We don't currently have a trilateral scheduled between the United States, Japan and South Korea," Jake Sullivan, the U.S. national security advisor, said in a press briefing on Monday. "But I will tell you there's a possibility for virtually anything in these small spaces where you have just […] in this case, 10 or 12 leaders in person there in Cornwall.”

The Biden administration has stressed the importance of cooperation among U.S. allies, particularly Korea and Japan, in order to contain China. Biden had his summits in Washington, with Suga in April and with Moon in May.

The last trilateral summit took place in September 2017 on the sidelines of the UN General Assembly. At the time, Moon’s counterparts were President Donald Trump and Prime Minister Abe.

Bilateral relations have deteriorated since Moon took office and scrapped an agreement to settle the issue of Japan’s wartime sexual enslavement of Korean women, signed in 2015 by his predecessor. The diplomatic chill worsened after the Supreme Court of Korea ruled that Japanese companies must pay compensation to individual Korean victims of wartime forced labor.

The dispute eventually spilled over to a tit-for-tat trade spat between Seoul and Tokyo in 2019. No sign of improvement has been seen over the past years.

Moon’s upcoming participation at the G7 summit is taking place during a sensitive time, as his room to maneuver diplomatically to tackle the forced laborer issue became wider with a new court ruling. A Seoul court on Monday dismissed a lawsuit by 85 Korean victims of wartime forced labor and their families against 16 Japanese companies, claiming the plaintiffs don’t have the legal right to seek damages.

In his Memorial Day speech on Sunday, Moon also made a rare mention of Lee Soo-hyun, a young man who died a hero to both Korea and Japan. In 2001, Lee, 26, was hit by a train in Tokyo as he tried to rescue a man who had fallen onto the tracks. Someday, Lee’s sacrifice will “be reborn as the spirit of cooperation between Korea and Japan,” Moon said in his speech.