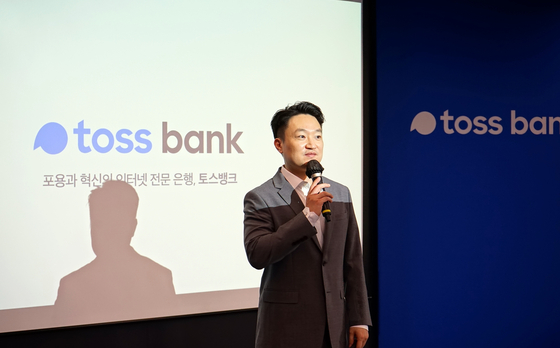 Toss Bank will open in September as it has obtained a license to operate as the country's third internet-only bank, after K bank and KakaoBank.

The Financial Services Commission (FSC) on Wednesday gave final approval for the bank to operate.

Toss Bank, a 34-percent-owned subsidiary of Viva Republica, which runs the Toss money-transfer service, will focus on increasing loans to the less creditworthy and thin filers, those lacking sufficient financial history for a full credit analysis, while making financial products and overall banking services easier for customers to understand.

The bank said in statement that in its first year, it will offer over 30 percent of its unsecured loans to the less creditworthy and thin filers. People are considered to have mid to low credit scores if they score 820 or fewer points in a system that tops out at 1,000 points.

Until last year, when credit scores were based on a scale of one to 10, people scoring four to 10 were considered less creditworthy.

By 2023, the bank aims to expand that portion to 44 percent, the highest among the internet-only banks.

KakaoBank is targeting 30 percent of its unsecured loans to the less creditworthy and K bank 32 percent by the end of 2023, according to data from the FSC.

Toss Bank CEO Hong Min-taek said during an online press briefing Wednesday that it is a feasible target for Toss Bank as it has made its own, more complex credit-scoring system that helps them identify people with the capacity to repay despite their seemingly low credit rating.

"We are not risking our financial stability to offer loans to the less creditworthy," Hong said. "We have a well-developed credit-scoring system based on millions of pieces of data we collected over the years through our Toss money-transfer app."

Hong said that during a pilot run of its credit scoring model on a group of less creditworthy consumers who have taken out loans in the past, the bank discovered about 30 percent of the consumers would have a higher score under its model. Some considered less creditworthy were even found to have the top credit scores under Toss Bank's model, Hong said.

"We hope to offer loans at reasonable rates to those who had to go find high interest rate loans because their capacity to pay back was not properly evaluated," Hong said.

Toss Bank services will be available within the existing Toss money transfer app.

Hong said the bank decided to do so to appeal to the 20 million existing users of the Toss app. The popular money transfer app has 11 million monthly active users, according to the bank.

"This saves huge marketing costs," Hong said. "Also, the Toss app has already been developed to handle massive traffic, and Toss Bank can take advantage of that security."

"We have technically figured out an alternative way to still offer the banking service, but for now, as we have not officially launched, we cannot give details about its operations," a spokesperson from the Toss Bank said.

"We are discussing with our shareholders plans to increase capital in the future, but as we can't exactly project the pace of our business growth, we will have to see," the CEO said.

On whether the bank has plans to partner with cryptocurrency exchanges as K bank partnered with Upbit, to increase users, Hong said the bank does not yet have plans to do so.

He gave a similar answer for its future plans to list on a stock market. Hong said nothing has been discussed yet, but he is open to opportunities.

On Wednesday, KakaoBank announced it has started using its own credit scoring model, which it claims better identifies people with the capacity to repay despite their low credit scores.

It said its new credit-scoring system was available from 6 a.m. Wednesday. It said the model was developed using financial data of consumers who took out loans from the bank since it started offering the service in July 2017. It also referred to customer phone bill payment histories using data from the country's three mobile carriers -- SK Telecom, KT and LG U+.

The bank announced it decided to raise the upper limit for loans open to the less creditworthy to 100 million won from 70 million won, and lower the minimum interest rate for the loans to 2.98 percent, a 1.52 percentage point cut.