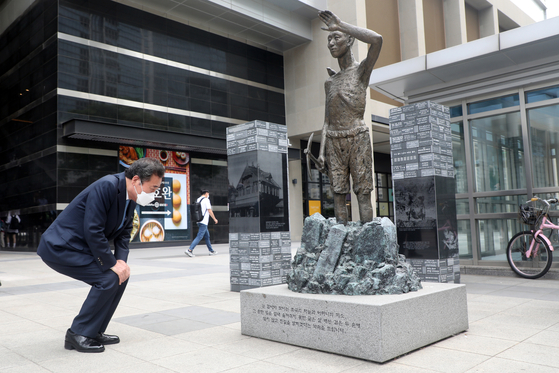 Lee Nak-yeon, a former prime minister and former head of the Democratic Party, observes a statue representing a conscripted worker during Japanese occupation in front of Yongsan Station, central Seoul, on Wednesday — two days after a Seoul court dismissed a case on forced labor victims. He met with forced labor victims earlier that day. [NEWS1]


Heavyweight politicians and members of the general public are lambasting a Seoul district court’s dismissal of a lawsuit by 85 Korean victims of wartime forced labor and their families against 16 Japanese companies.

A Blue House petition calling for the impeachment of the Seoul Central District Court senior judge in charge of the case, Kim Yang-ho, surpassed 230,000 signatories as of Wednesday.

Song Young-gil, head of the ruling Democratic Party (DP), during a meeting of the Supreme Council at that National Assembly on Wednesday compared the decision to one “made by a judge of the Gyeongseong Court of the government-general of Korea,” referring to the brutal 1910-45 Japanese colonial rule over Korea.

Song went on to say that there was “a lot of unnecessary political language” in the ruling by Judge Kim, “raising concerns by forcibly inserting his political inclinations and interpretations.”

The Seoul court said that while the rights to individual claims by Koreans against Japan or Japanese nationals cannot be considered to have expired under the 1965 Korea-Japan claims agreement, the ability to exercise such rights through lawsuits is “limited.” The court claimed that proceeding with the case, in which plaintiffs demanded a combined total of some 8.6 billion won ($7.7 million), could violate international legal principles that countries cannot use domestic law to justify failures to perform a treaty.

The decision counters rulings by Korea's Supreme Court in October and November 2018 ordering Nippon Steel and Mitsubishi Heavy Industries to compensate the forced labor victims after acknowledging the illegality of Japan’s colonial rule of Korea and recognizing that the individual’s right to compensation had not expired.

Tokyo maintains that all compensation issues related to Japan’s colonial rule over Korea were resolved through a 1965 treaty normalizing bilateral relations and has protested the forced labor rulings.

Presidential hopeful Lee Nak-yeon, a former prime minister and former head of the DP, told reporters Wednesday that the ruling “is difficult to comprehend” after earlier meeting with forced labor victims and visiting a statue of conscripted workers during Japanese occupation in front of Yongsan Station in central Seoul.

He continued, "It is our consistent position that the individual right to compensation has not expired despite the Korea-Japan claims agreement, and the Supreme Court's decision is the same,” saying that overturning the top court ruling thus “undermines legal stability.”

Seoul’s Ministry of Foreign Affairs said in a statement after the court decision Monday that it will “consult with the Japanese side with an open stance to discuss a reasonable solution acceptable by both governments and all parties concerned, while respecting court rulings and victims' rights,” and taking into consideration Korea-Japan relations.

However, the ministry’s stance became somewhat more reserved the next day, and Choi Young-sam, the Foreign Ministry spokesman, told reporters in a press briefing Tuesday, “The Korean government will keep an eye on the future trends in relation to the ruling.”

When asked if the Foreign Ministry had changed its stance on the issue, a ministry official only told reporters Tuesday, “It is a position that came after a comprehensive review of the situation.”

Seoul has been seeking to resolve the deteriorated bilateral ties with Tokyo because of historical issues diplomatically with a tepid response from Japan and also mixed sentiments domestically, often fueled by ongoing historical and territorial disputes.

Koreans' anti-Japan sentiments peaked after the Japanese government unilaterally imposed exports restrictions on Korea in the summer of 2019. The restrictions were seen as retaliation against the forced labor rulings and led to a period of tit-for-tat diplomacy and Koreans’ boycott of Japanese products.

The Moon Jae-in administration, since the inauguration of Japanese Prime Minister Yoshihide Suga last fall and the onset of the Joe Biden administration, has been extending an olive branch and made a series of gestures in order to mend diplomatic relations and separate areas of cooperation from historical issues. Washington has been pressuring its closest allies in the region, Seoul and Tokyo, to overcome their difference and coordinate more closely, trilaterally.

The Seoul district court’s argument that while the right to individual claims has not expired, it doesn’t have the authority to do so through lawsuits is in line with the argument by the Supreme Court of Japan when it dismissed a case by Chinese forced labor victims in 2007.

Japanese media have also been cautiously calling for a diplomatic solution to Seoul-Tokyo relations.

Tokyo Shimbun in an editorial Wednesday emphasized the need to “expedite relief for the elderly plaintiff through diplomatic negotiations, rather than relying solely on judicial decisions.”

Similarly, the Yomiuri Shimbun reported on the same day that it is "important for President Moon Jae-in not to be swayed by the judiciary, but to respond responsibly to current issues between Korea and Japan.”

However, Japan's insistence on a diplomatic solution is based on the premise that the Korean government should take pre-emptive measures to resolve the problem.

Japanese Chief Cabinet Secretary Katsunobu Kato said in his Monday briefing that Japan will look forward to “specific measures from the Korean side to resolve the problem.”

However, it is unclear if the Blue House will continue its diplomatic overtures to Tokyo going against such domestic sentiment ahead of the presidential elections next year, and also if the two sides would be able to properly mend relations or just keep them from deteriorating any further.