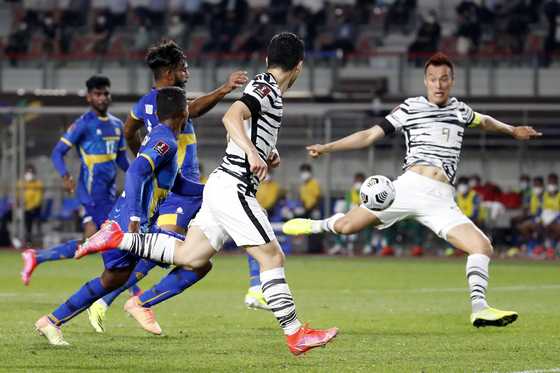 Korea's Kim Shin-wook, right, scores the opening goal after receiving a header from Nam Tae-hee, center, in a World Cup qualifying match between Korea and Sri Lanka at Goyang Stadium in Goyang, Gyeonggi, on Wednesday. [NEWS1]


Korea stayed hot on Wednesday, taking a comfortable 5-0 win over Sri Lanka in a qualifying match for the 2022 Qatar World Cup at Goyang Stadium in Goyang, Gyeonggi.

Head coach Paulo Bento left a lot of Korea’s biggest names on the bench for the start of the Sri Lanka game, choosing to rest the likes of Son Heung-min, Hwang Ui-jo, Kim Min-jae and Kwon Chang-hoon for the match against the lowest-ranked team in Group H.

Despite fielding a weaker team, Korea made short work of the Sri Lankan side, although the south Asian team didn’t go down without a fight, offering as much competition in the first half as Turkmenistan had a few days earlier.

The Taeguk Warriors first goal came 14 minutes into the game, when Nam Tae-hee picked up a long cross in the box, heading it to the feet of Kim Shin-wook. Kim punched the ball past the Sri Lankan goalkeeper to take the score to 1-0.

Korea marked the first goal with a ceremony honoring Yoo Sang-chul, former star of the national team and one of two goal scorers in Korea’s first-ever World Cup win, who died Monday at 49 years old. 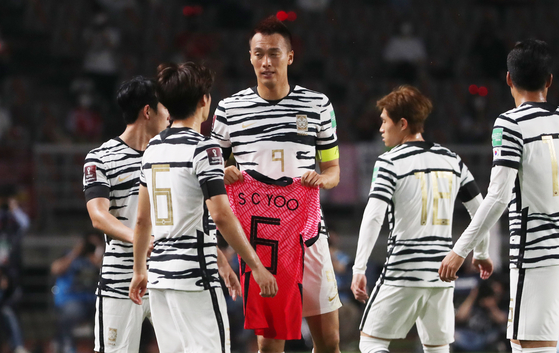 
Following the goal, the players stood in a line holding up a Korean team jersey bearing Yoo’s name and the No. 6, his jersey number when he played for the national team. All players and staff on the team also wore black armbands or ribbons throughout the game in memory of Yoo.

The Taeguk Warriors came back again in the 21st minute with a second goal, a textbook play that saw Song Min-kyu pick up the ball on the left wing, cross it into the box to Lee Dong-gyeong, who took one touch to volley the ball straight into the back of the net.

The spot kick was rewarded for a foul in the box on Hwang Hee-chan, although the television replay appeared to show no contact between the defender and Hwang. The penalty was rewarded regardless, and Korea went up 3-0.

The first half finished with the score set at 3-0, with Korea controlling 70 percent of possession and all shots on goal.

The Taeguk Warriors made two changes going into the second half, with Kim “the Monster” Min-jae taking over from Park Ji-soo at center back and Kwon coming on for Nam in midfield.

Korea got the second half started quickly, with Hwang scoring the fourth goal of the game in the 51st minute.

Picking up the ball on the edge of the box after a deflected free kick, Hwang blasted the ball through the crowd and past the goalkeeper to take the score to 4-0.

As if Sri Lanka wasn’t in enough trouble, the south Asian side then went down to 10 men in the 56th minute, when Asikumar Rahuman was sent off following his second yellow card for an intentional handball just outside his side’s box.

Korea were unable to produce anything from the free kick that followed, but Sri Lanka did mount a counterattack that took them close to the Korean goal and briefly brought goalkeeper Jo Hyeon-woo into the action. The attack fizzled out, and the action quickly moved back to the Sri Lankan half.

There was a lull in the offense following the fourth goal, as Sri Lankan goalkeeper Sujan Perera put up a valiant fight in front of the net, stopping far more shots than he allowed in.

Korea made two more changes in the 71st minute, bringing on Jung Sang-bin and Kang Sang-woo for Kim Shin-wook, who passed the captain’s armband to Hwang, and Lee Ki-je.

The new additions quickly put an end to Sujan’s one-man defensive, as Jung made his Taeguk Warriors debut one to remember with the fifth goal of the game, deflecting a shot from Lee Dong-gyeong into the back of the net in the 76th minute.

Sri Lanka held Korea off for the last 15 minutes of the match, ending the game with Korea’s second 5-0 win in a week, after Bento’s boys went up 5-0 against Turkmenistan on Saturday.

The Korean national team currently leads Group H in the second round of Asian World Cup qualifiers with one game left to play. Korea is first with 13 points, followed by Lebanon with 10, Turkmenistan with six, and Sri Lanka with zero. North Korea has withdrawn from the tournament.

Korea and Lebanon had been tied at the top of the group, but the middle eastern side lost 3-2 to Turkmenistan in their game earlier today, moving them down to second place.

Korea and Lebanon only have each other left to play, and whoever wins, Korea will almost definitely be left topping the group on goal difference alone. Korea have a huge plus 20 goal difference having scored a total of seven goals against Turkmenistan and 13 against Sri Lanka across home and away legs, while conceding none.

The top team from each group in the second round qualifies for the third round of qualifiers, alongside the four best second-place teams. The 12 teams that reach the third round will be sorted into two groups of six, again playing round robin home and away matches.

The top two teams from each group will immediately qualify for the World Cup, while the two third-placed teams will play each other for the right to compete in the inter-confederation playoffs.

Korea and Lebanon will face off on Sunday at Goyang Stadium in Gyeonggi at 3 p.m. The first game between the two ended in a 0-0 draw on Nov. 14, 2019. The Taeguk Warriors will want to do better this time as they face much tougher challenges before reaching Qatar.

Regardless of the outcome on Sunday, Lebanon will join Korea in the third round, as it currently leads the ranking for the best runner-up teams, with 10 points putting it above any other team in the tournament.

The Korean U-23 team will also be in action this week, taking on Ghana in a friendly ahead of the 2020 Tokyo Olympics at Jeju World Cup Stadium in Seogwipo, Jeju at 7 p.m. on Saturday.

K League announces 24-man squad that will take on Tottenham