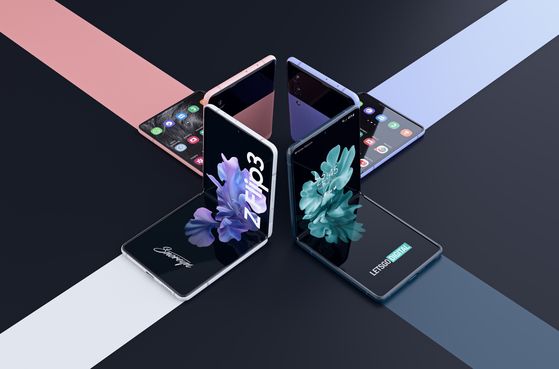 A concept rendering by LetsGoDigital of a possible Galaxy Z Flip 3. [LETSGODIGITAL]


Samsung Electronics will significantly cut prices for new foldable models  -– possibly below 2 million-won ($1,793) -- in a push to make them more popular.

A source at the smartphone maker confirmed Wednesday that it is planning to dramatically cut prices after multiple media outlets reported that the prices could be cut by up to 20 percent, or $400 for top of the line models.

“The executives want this year to be a watershed moment to make fordable models into a mainstream product category,” the source said, “To boost their appeal, [Samsung Electronics] will cut the price to around or below the 2 million-won level.”

If the Z Flip 3 gets a 20 percent price cut, it will sell for around $1,104, which is comparable to the latest models in the Galaxy S series and Apple’s iPhones.

New folding models - tentatively known as the Galaxy Z Fold 3 and Galaxy Z Fllip3 -- are expected to be released in the second half of this year.

“For this year, only foldable models will be unveiled in the Unpacked show that will be held in either July or August,” the source said, "in contrast to previous events that also featured the Galaxy Note range."

He remained mum about whether the newest Z Flip will come with an S-Pen stylus.

Asked if the Note series will be discontinued, the source said that it was unlikely.
“Samsung will release a new Galaxy Note next year as there is a firm base of users,” the source said, “We just skipped this year because of market conditions.”