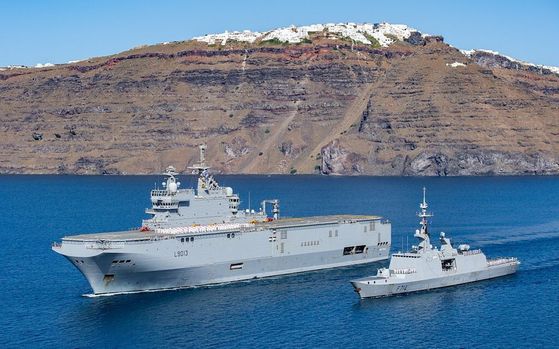 
France took part in an allied naval exercise, dubbed the Jeanne D'Arc mission, in the Indian and Pacific Oceans with the United States, Australia and Japan between May 11 and 16.

With diverse interests in this vast area remaining from its colonial empire and current international obligations, France aims to send a message that it is ready to take a prominent role in collective defense and protect its interests and citizens in its overseas territories from various threats, such as territorial disputes, over-fishing, rising U.S.-China tensions, and environmental problems.

The JoongAng Ilbo conducted an interview with Rear Admiral Jean-Mathieu Rey, ‎Commander of the armed forces in French Polynesia, and the French Joint Commander of the Asia-Pacific region, about the Jeanne D'Arc mission and its objectives. 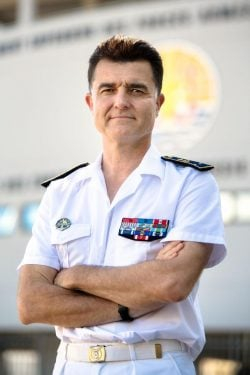 Q. What is the aim of Jeanne D'Arc mission?

A. The Jeanne d'Arc mission group has three main objectives. The first is to train cadets, which number 148, of which 10 percent are from partner countries. The five-month deployment period, taking place 17,000 kilometers from Toulon naval base, aims to finalize their initial training.

However, the Jeanne d'Arc group is not only a training deployment. It is also a fully operational amphibious naval contingent, whose deployment directly contributes to the French defense strategy in the Indo-Pacific region.

France is in Europe, but it is sending an amphibious assault fleet to Northeast Asia. Why?

France is not only a European country, but it is also an Indo-Pacific nation thanks to its overseas territories Mayotte, La Réunion, New Caledonia and French Polynesia, which are collectively home to 1.6 million French citizens.


As an Indo-Pacific nation and a worldwide power, France intends to assume its responsibilities in the region. Therefore, it deploys its permanent-based military assets, which are regularly reinforced by mainland units, such as the Jeanne d’Arc group, or carrier strike group deployments centered on the Charles de Gaulle aircraft carrier, which has been operating in the Pacific Ocean in 2019 and in the Indian Ocean this year.

France can deploy all components of its military in the Indo-Pacific, including the nuclear submarine Emeraude, which recently conducted a patrol in the South China Sea. Air and Space Force aircraft, such as Rafale fighters, MRTT tankers and A400M transports also operate regularly in the area and will come back at the end of this month.

In June, the United Kingdom will deploy an aircraft carrier group in Northeast Asia. The British government has defined China as a rival. Is that also the French opinion?

The French Indo-Pacific strategy does not target any country.

Due to its responsibilities as a permanent member of the United Nations Security Council, France intends to be a balancing power that promotes multilateralism and peaceful conflict resolution.

France supports strengthening and defending international law, particularly the United Nations Convention on the Law of the Sea (UNCLOS), which allow freedom of navigation and overflight in the high seas and in the international straits.

According to the Japanese media, one aim of the Jeanne D’Arc exercises is to simulate the reconquest of far-off islands by the United States and Japan. Is that true? If that is the case, what are the targets of this training?

As I explained before, one of the missions of the Jeanne D’Arc group is to strengthen our partnerships in the Indo-Pacific. It involves exercises for developing and improving our interoperability.

Jeanne d’Arc is an amphibious group dedicated to sharing tactical skills between all the participants and to strengthen cooperation between partners. It does not target any country and is not dedicated to convey an offensive message in the region.

What is the biggest security threat for France?

Threats in the Indo-Pacific are numerous, but these are mainly collective challenges, not threats specific to France.

I am particularly concerned about the risk of nuclear proliferation by North Korea, but I am also concerned about territorial disputes, maritime terrorism, piracy, overfishing, trafficking, rising tensions between China and the United States and obviously environmental issues.

What is your evaluation of recent threats to maritime safety?

Today, threats to maritime security are multifaceted. They cover territorial issues (most of the above-mentioned disputes are maritime disputes), security issues (piracy in the Strait of Malacca, terrorism in the Sulu and Celebes seas), climate issues (natural disaster, global warming impact) and economic issues (resources overexploited and densification of maritime flow).

In ten years, which changes should we expect to observe in maritime threats in Northeast Asia?

In a rapidly and constantly evolving area, with various issues and actors, it is extremely difficult to predict a ten-year evolution. That’s why I won’t do a specific prospective work, but I think that most of mentioned threats will always exist in the ten coming years.

In which area does the French Navy wish to cooperate with the South Korean Navy?

Even if distances and the pandemic limit opportunities for cooperation, we share common concerns and wish to improve our bilateral naval relationship, especially in maritime security. Korean ships visit ports in France or French ships do the same in Korea to improve our mutual knowledge and organize common exercises. Our two navies are high-tech equipped, which should allow us in the future to increase the complexity of naval exercises.

In 2020, during the commemoration of the 70th anniversary of the Incheon landing, in which the French ship La Grandière took part, Admiral Prazuck, Navy Chief of Staff, remarked how this engagement created a friendship that remains strong, deep and alive today.

What is the strategic value of aircraft carriers or PHA?

Aircraft carriers and amphibious assault helicopter carriers are assets that project both power and armed forces. They bring a huge military capability into play that strengthens a strategic position.

Aircraft carriers provide the capacity to control perfectly both the sea and the airspace above, as well as the ability to project power at a significant distance. They are complex military tools, but with a unique strategic value today.

Amphibious assault helicopter carriers are more flexible and accessible. Their versatility allows them to fulfill missions as diverse as an amphibious operation or the delivery of humanitarian aid after a natural disaster at a very short notice.

France has a long and rich experience at air and sea and by operating aircraft carriers, whose control is a complex art. It requires the acquisition of numerous different skills, all interacting in a perfect synergy.

For example, an aircraft carrier is at the same time a warship, a control tower, an airport landing strip, an aircraft maintenance factory, a little town of 2,000 people and an operational center, conducting military activities on, above, and under the sea.

Perfect coordination is mandatory to combine all these capacities with the precision required by maritime and air environments in order to gain the military effect expected.

A chronicle of the war against Covid (KOR)