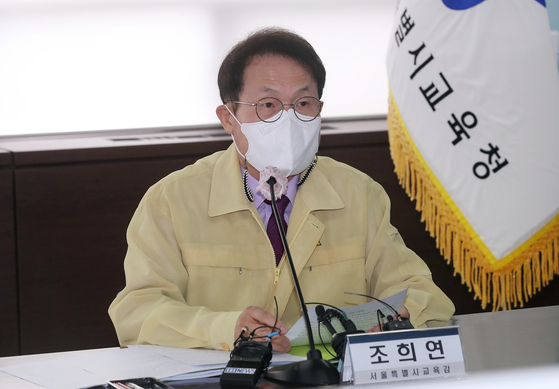 Cho Hee-yeon, superintendent of Seoul Metropolitan Office of Education, speaks during a press conference in Seoul on Thursday. [YONHAP]


The white-underwear-only rule still existing in some girls’ middle and high schools in Seoul may soon be just a distant memory of the past.

The Seoul Metropolitan Office of Education announced it will conduct special consulting in schools where the rule is still practiced and, starting Thursday, monitor the situation until the changes are made.

According to data released by Seoul Metropolitan Council member Moon Jang-gil, 31 out of 129 girls' middle and high schools in Seoul — 9 middle schools and 22 high schools — still regulate students’ underwear, such as the color, pattern and the transparency, as part of their student code of conduct.

These schools had rules such as, “Students must wear underwear even under their summer uniform,” “Penalty points will be given to all types of underwear except for white patternless undergarments,” “Lacy lingerie is prohibited” and “Blouses must be long enough that when raising one's arms, the underwear cannot be seen."

However, it was found that some schools kept such excessive regulations, saying it is the “school tradition.”

After a pouring of requests by students, the Seoul Metropolitan Office of Education decided to conduct special consultations in two stages and conduct an ex officio investigation if the rules are not corrected.

In the first phase of special consultations, the education office will conduct special consulting at the 31 girls’ middle and high schools in Seoul, most of them private institutions, where the underwear regulations still exist.

The consulting will be expanded to other schools where consulting is deemed necessary during the second phase.

After monitoring whether changes have been made, the Seoul education office will issue an ex officio investigation into schools that show no improvements.

"In order to guarantee students' rights to realize their individuality, we will implement regulations on the student code of conduct as early as possible and continue to ensure students' rights to decision-making.” said Cho Hee-yeon, superintendent of the Seoul Metropolitan Office of Education.

However, questions still remain regarding punishment for schools that fail to abide by the announcement, as the final decision to make any change is up to the school itself.


According to Article 8 of the Elementary and Secondary Education Act and Article 9 of the Enforcement Ordinance of the Act, the head of a school may enact or amend school rules within the ambit of the act.

"While most public schools follow our announcement, it often gets blocked by the school principal, the board members or the steering committee in private schools as there is no legally binding force,” an official of the Seoul Education Office told the Korea JoongAng Daily.

“But until now, there has been no ex officio investigation or correctional investigation [on such regulations on students], so schools will now feel pressured by such an announcement and the news reports, which is what we are looking forward to.”