Bank of Korea governor hints at rate hike within the year

Bank of Korea governor hints at rate hike within the year 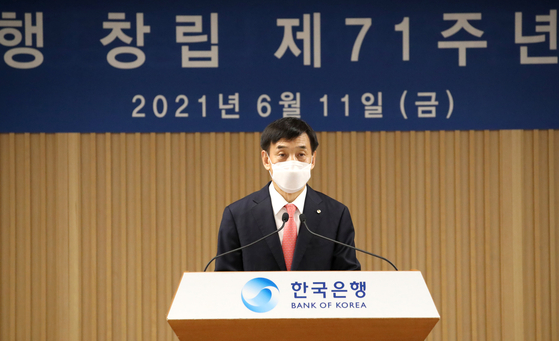 Bank of Korea Gov. Lee Ju-yeol delivers a commemoration speech for the 71th annivesary of the central bank, at the bank's headquarters in Jung District, central Seoul, on Friday. [BANK OF KOREA]

Bank of Korea Gov. Lee Ju-yeol hinted at a potential rate hike within the year during his commemoration speech for the central bank's 71st anniversary on Friday.

"If the [Korean] economy is expected to continue showing strong recovery, we should normalize currently expansionary monetary policy from an appropriate time in the future in an orderly manner," Lee said, while introducing the major tasks the bank will focus on in the latter half of the year.

Lee said the right timing should be decided based on progress with the Covid-19 situation, speed and sustainability of economic recovery, and financial risks related to mounting household debt.

Lee added that there should be abundant communication between economic players — government, businesses, and households — to prevent shockwaves in the market.

The central bank chief cited snowballing household debt as a major risk to the Korean economy.

"As people are increasingly borrowing to invest in real estate, stocks, and even cryptocurrencies, the household debt problem has become more severe," Lee said. "There are possibilities that many borrowers could face difficulties paying back debt, if financial support measures that were put in place during the Covid-19 pandemic such as deferred maturity of debt end."

The central bank governor had hinted at a potential rate hike during a briefing held after a monetary policy board meeting last month.

Lee had said that the bank can't rush the rate increase, "but at the same time, we are considering the risks of massive side effects if we are late."

He added that whether the bank will raise rates this year "really depends on the pace of economic recovery."

While hinting optimism for the country's economy, by upping 2021 growth forecast to 4 percent from its earlier projection of 3 percent, the bank still kept the base interest rate steady at a record low of 0.5 percent last month, saying economic uncertainties still remain as vaccinations are on the way and household debt continues to grow.

During the commemoration speech Friday, Lee also touched on the importance of being prepared for the changing payment environment. With digitalization speeding up in the payment sector, meaning a decline in the use of cash, Lee said there is a growing need for the bank to be prepared for central bank digital currency, or CBDC.

The central bank is currently seeking technology partners for its 10-month test of CBDCs in a virtual environment set for the latter half of the year.