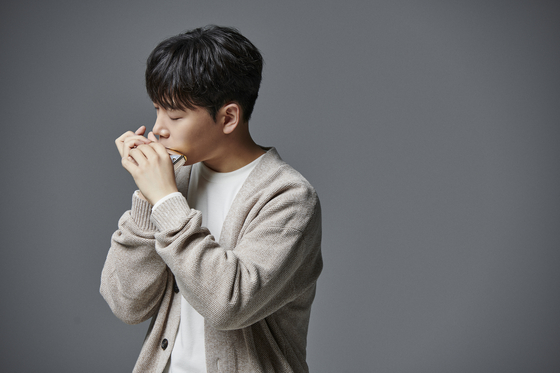 
Harmonica, the small reed wind instrument also known as a mouth organ, is not a common instrument that accompanies an orchestra in classical music concerts. It’s familiar though, at least for Koreans, as it’s one of the most common instruments that dads attempt to teach themselves.

But Park Jong-seong, a 32-year-old harmonicist, has been slowly changing that image of “this versatile instrument,” proving that it too can be a key player on the classical music scene.

The artist confessed that “lifting the status of harmonica” was not an easy job as people, especially in Korea, have strong preconceptions about it. “But I am ready to show that this small instrument can stand under the spotlight and lead a full orchestra.”

The harmonicist announced last week that he’s launching the “Harmonica with Orchestra” project.

“I’ve been invited to other classical concerts as an accompanying artist, but it’s the first time for me to organize such a project where the harmonica holds center place,” Park said. “I am sure that the sight of this seemingly insignificant instrument leading a large orchestra can encourage many people and give hope to somebody.”

Park picked up the instrument as a hobby at age 12. The hobby turned into his career as he decided to spend his life “doing what I most love to do.” Since then, he has achieved many firsts, including becoming the first Korean to win the World Harmonica Festival in 2009, which is held every four years in Germany.

“Harmonica with Orchestra” launched with a concert on Sunday evening at the Gangdong Arts Center in eastern Seoul. The program includes some renowned harmonica scores like Mikhail Glinka’s Overture to “Ruslan and Ludmila,” George Gershwin’s “Rhapsody in Blue,” and Pietro Mascani’s “Cavalleria Rusticana.”

Park also performed “Harmonica Memorial,” a harmonica concerto composed by Korean composer Kim Hyung-joon in 2019 for Park after realizing the lack of concerto pieces for the instrument. Park premiered the work last February at the Seoul Arts Center in southern Seoul and received high praise from both critics and audience members.

Although the programs may differ, Park said he will continue on with the project throughout this year and make sure he raises the instrument’s status as well as people’s interest in it.

“There’s only a handful of music scores written for harmonica and the orchestra,” he said. However, due to harmonica’s rather short history, about 200 years, “the instrument sadly couldn't meet great composers like Mozart or Beethoven.”

“This project will also be an opportunity to draw the attention of contemporary music composers and let them take the instrument seriously despite its relatively modest image compared to violin or piano,” he said. “I really hope to contribute to the growth and development of the harmonica and this ‘Harmonica with Orchestra’ project is the first serious step I’m taking.”