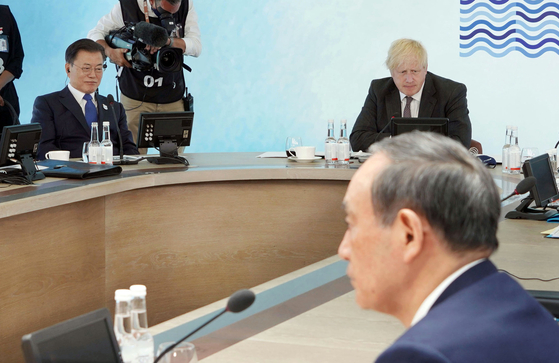 
Tokyo pulled the plug on a meeting between Korean President Moon Jae-in and Japanese Prime Minister Yoshihide Suga on the sidelines of the Group of Seven (G7) summit, according to diplomatic sources Monday.

The two sides “tentatively agreed” upon an informal meeting between the two leaders during the G7 summit in Cornwall, Britain, which ran from Friday to Sunday, said a Korean Foreign Ministry official.

But Moon and Suga ended up only briefly exchanging greetings Saturday ahead of an expanded meeting of the G7 summit at Carbis Bay Hotel. It was their first meeting since the Japanese leader took office last fall.

Moon and Suga, accompanied by their first ladies, met for a second time briefly at a dinner hosted by British Prime Minister Boris Johnson and his wife Saturday evening.

The Korean official added, “It is regrettable that the Japanese side didn’t respond to even a brief meeting, which was tentatively agreed upon at the working level, because of our annual East Sea territory defense drills.”

Korea is set to hold the East Sea Territory Protection Exercise Tuesday, which involves the Navy, Air Force and Coast Guard, according to the government and military sources. The Dokdo drills, dating to 1986, have taken place twice a year, in the summer and winter, since 2003.

Amid an ongoing row over historical issues stemming from Japan’s 1910-45 colonial rule and a trade spat, Seoul had been working on arranging a meeting between Moon and Suga ahead of the G7 gathering. There had also been talk of a possible three-way meeting among the leaders of Korea, Japan and the United States.

Japan claims the Dokdo islets in the East Sea, effectively controlled by Korea, which it calls Takeshima.

The Korean government has protested a map including Dokdo as Japanese territory on the official Tokyo Summer Olympics website. Seoul maintains that the islets are historically, geographically and under international law an integral part of Korean territory.

After the G7 summit and before departing from Britain, Moon wrote in a lengthy Facebook post Sunday, “The face-to-face first encounter with Prime Minister Suga was a valuable occasion which may serve as a new beginning in Korea-Japan relations,” adding that “it is regrettable that it didn’t lead to a summit.”

The lack of any formal or informal talks, let alone any breakthrough, between Seoul and Tokyo comes despite efforts by the Joe Biden administration to encourage its closest allies in the region to mend relations.

After the G7 summit, Suga maintained that he doesn’t plan on holding a meeting with Moon any time soon.

Suga said in a press conference Sunday, according to Japanese media outlets, that it is “not a situation to hold a summit [...] where promises between countries are not being kept.”

His remarks referred to the conflict over the issue of compensation of Korean forced laborers and the victims of the Japanese military’s wartime sexual slavery.

Tokyo maintains that all compensation issues related to Japan’s colonial rule over Korea were resolved through a 1965 treaty normalizing bilateral relations and has protested the Korean Supreme Court’s rulings in 2018 siding with forced labor victims. Japan has been demanding that Korea come up with a solution to the situation.

About his first encounter with the Korean president, Suga told reporters, “President Moon approached me first, and I said hello so as not to be rude." He said Moon approached him before the dinner barbecue as well.

Korean Second Vice Foreign Minister Choi Jong-moon said on reports of Suga’s comments in an MBC radio interview Monday that “remarking on who said hello first is rather tacky.”

Reflecting on his experience preparing for many summits, Choi said, “Usually, the leader who spots the other leader first in the leaders’ lounge or banquet hall approaches first and naturally makes conversation.

The Blue House on Monday denied reports in Japanese media that Tokyo had objected to expanding the G7 to a G10, or G11, framework.

A government official familiar with the G7 preparation process told reporters, "There was no such proposal this year to expand the G7.”

The G7 nations are the United States, Japan, Germany, Britain, France, Italy and Canada. The leaders of Korea, Australia, South Africa and India were invited to this year's summit as guests. 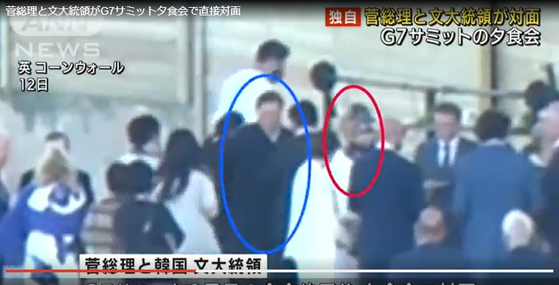