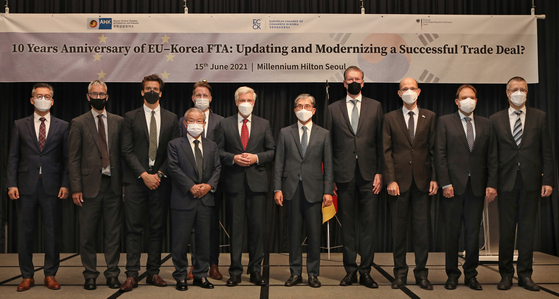 Participants at a conference co-hosted by the European Chamber of Commerce in Korea (ECCK), Korean-German Chamber of Commerce and Industry and the German Embassy pose at the Millennium Hilton Seoul, central Seoul, on Tuesday. Held to mark the 10th anniversary of the Korea-European Union (EU) free trade agreement (FTA), the event looked back at its achievements and raised suggestions to improve trade relations. ECCK Chairman Dirk Lukat, fourth from right, pointed out that a static FTA can lose effectiveness as the world changes and called for a modernization of the agreement. Other participants included German Ambassador to Korea Michael Reiffenstuel, center, and Martin Henkelmann, KGCCI president, third from right. [PARK SANG-MOON]