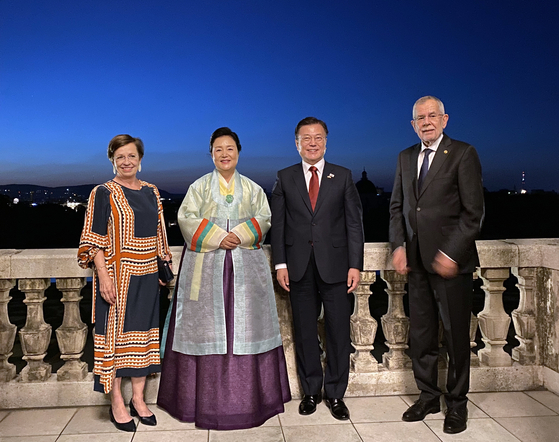 
Korea wants help from Europe to become a global vaccine production hub, President Moon Jae-in stressed Tuesday in a videoconference with Franz-Werner Haas, CEO of German biotech company CureVac, while on a visit to Austria.

CureVac has the technology to produce mRNA, or messenger ribonucleic acid, Covid-19 vaccines. It will compete with Pfizer-BioNTech and Moderna, companies whose coronavirus vaccines have boasted high efficacy rates. The CureVac vaccine, CVnCoV, is undergoing late-stage clinical trials and has yet to receive approval from EU regulators.

During the talks with Haas, Moon referred to his bilateral talks with German Chancellor Angela Merkel at the G7 meeting Saturday, where they discussed ways to cooperate on vaccines.

Moon told Merkel that Germany, as a vaccine development leader, and Korea, with its vaccine production capabilities, need to find ways to cooperate to facilitate global vaccine supply and make it more equitable.

According to the Blue House, Merkel promised to consult with German vaccine companies that possess mRNA-related technology.

The company that Merkel referred to was CureVac.

Haas during the videoconference expressed interest in and support for Moon's global vaccine hub plan.

The Blue House said Tuesday that the talks were "an opportunity for Korea and CureVac to continue discussions for cooperation."

CureVac, launched in 2000, is a small company compared to other major Covid-19 vaccine developers. It aims to produce 300 million vaccine doses this year and 1 billion next year. To do so, it will have to find a partner for mass production. It is also working to develop a second-generation vaccine for coronavirus variants.

Korean companies have been reported as potential producers.

Among Korean companies, SK Bioscience is producing vaccines for AstraZeneca and Novavax, Samsung Biologics for Moderna, and a consortium formed by Hankook Korus for Russia's Sputnik V.

Moon underscored Korea's vision to become a vaccine production hub during the G7 meeting, which included a session on health, touting the country's biopharmaceutical production capacity and plans to expand vaccine partnerships, as discussed during the Korea-U.S. summit last month.

Moon also met with AstraZeneca's CEO Pascal Soriot Saturday and stressed the significance of its Covid-19 vaccine being produced in Korea by SK Bioscience directly through a technology transfer.

"It has helped Koreans feel more secure about receiving shots," he said. "In addition, this has enabled Korea to take the important first step toward emerging as a global vaccine production hub."

He added that Korea will actively work to resolve the global vaccine shortage and asked AstraZeneca to utilize its production capacity to supply vaccines to the world "more smoothly."

During his three-day state visit to Austria Monday, Moon said that he will "proactively" push for cooperation with North Korea on Covid-19 vaccine supplies.

Austria was the second leg of Moon's Europe tour, which started with the G7 summit in Britain Friday.

Moon said during a joint press conference with Austrian President Alexander Van der Bellen following their bilateral summit at the Hofburg Palace in Vienna that Seoul will do its part to ensuring equitable vaccine access for developing countries.

"If South Korea plays a role as a global vaccine production hub, North Korea would of course could become a partner for cooperation," said Moon.

He noted that the United States is also "actively supportive of humanitarian cooperation with North Korea."

Moon said that he hoped for "positive response" from Pyongyang, signaling hopes that resumed inter-Korean dialogue could help prod along North-U.S. talks.

Van der Bellen likewise said a signal from Pyongyang would be "helpful."

The two leaders in their summit discussed issues such as bilateral relations, climate change, the Korean Peninsula peace process and partnering in science and technology to respond to the fourth industrial era.

The two sides recognized the potential for collaboration between Austria's cutting-edge industries and South Korea's commercialization and industrialization capabilities, said the Blue House.

The Austrian president said his country supported the initiative to establish peace on the Korean Peninsula.

They attended a signing ceremony on a deal to promote cultural cooperation.

Korea and Austria agreed Monday to elevate their relations to a "strategic partnership."

The two countries will commemorate the 130th anniversary of establishing of diplomatic ties next year.

Moon arrived in Vienna on Sunday. He was the first Korean president to visit the country since the two nations established diplomatic relations in 1892.

Moon next headed to Spain for a state visit and a meeting with King Felipe VI.