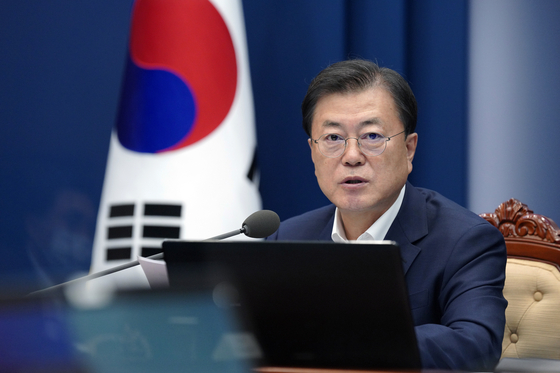 
President Moon Jae-in declared an ambition for Korea to become the world’s fifth largest vaccine-producing nation by 2025 and an international hub for Covid-19 vaccine production and distribution.

“The government will designate vaccine development as one of the nation's top three strategic technology areas along with semiconductors and batteries, and invest 2.2 trillion won ($1.92 billion) over the next five years,” Moon said in a meeting on the government's vaccine hub strategy held Thursday.

The government earmarked 200 billion won ($174 million) for such plans in a second supplementary budget this year, and plans to dedicate an additional 2 trillion won ($1.7 billion) by 2026.

Moon proposed a vision of maximizing the vaccine production capabilities of domestic drug manufacturers by expanding tax breaks on vaccine-related research and development and facilities investment.

He presented plans to promote the cultivation of manpower in the biopharmaceutical industry: 200 new medical scientists annually, as well as some 10,000 additional experts in clinical testing and 2,000 bio production experts.

Moon promised to expand global vaccine partnerships with countries including Germany, Britain, Canada and Australia in addition to a Seoul-Washington vaccine supply partnership he forged with U.S. President Joe Biden in May.

The president stressed the importance of "vaccine sovereignty" through the speedy development of domestic vaccines.

“Covid-19 vaccines developed by domestic drug firms will enter Phase 3 clinical trials this month, and we are expecting to commercialize our first domestic vaccine by the first half of next year," Moon said, adding that development of messenger RNA (mRNA) vaccines is also under way.

Currently, seven companies are doing clinical trials for their own Covid-19 vaccines, and some, including SK Bioscience, are expected to enter late-stage phase three clinical trials by the end of the year.

In addition, the government will consider pre-purchasing homegrown vaccines that have interim results of Phase 2 clinical trials or approval of phase 3 trials.

To allow more companies to quickly enter phase three clinical trials, the country will reduce the clinical approval period by half and push for integrated evaluations by multiple institutions through a state-designated central clinical examination committee.

In addition, it will use online and offline promotions to recruit candidates to participate in clinical trials.

Moon ordered the Global Vaccine Hub Preparatory Committee, which was formally launched Thursday, to “be resolved to take this opportunity to develop an mRNA vaccine and see the end.”

“Vaccines are the most effective means of defense in the fight against Covid-19,” Moon said.

“In the end, the fundamental solution to the [global problem of vaccine supplies] is to dramatically increase the supply of vaccines,” Moon added.

Regarding the president’s recent call for "strong measures” to address crashes of the online vaccine booking system, the Korea Disease Control and Prevention Agency (KDCA) announced Thursday that it revamped the system, and said it can now accommodate more than 2 million reservations per hour.

The system experienced system overloads when bookings were opened for people in their 50s.

The KDCA said it transferred the self-verification system to private companies' cloud servers, which will enable a significant increase of data processing per hour.

By expanding and relocating the servers, more than two million people will be able to make bookings per hour from the previous 300,000, the agency said.

The country will also ban proxy booking, or reservations made on behalf of someone else, and will only allow bookings made by an applicant to reduce waiting times.

The new rules will go in effect from 8 p.m. next Monday, when reservations will open to the general public between 18 to 49.

Those who are unable to book a vaccine online are advised to contact the KDCA's 1339 hotline or their local government’s call center.

From now on, identity verification will be possible only once every 10 minutes to prevent people from accessing the site using multiple devices at the same time.

More options will be added for identity verification such as Naver and Kakao. 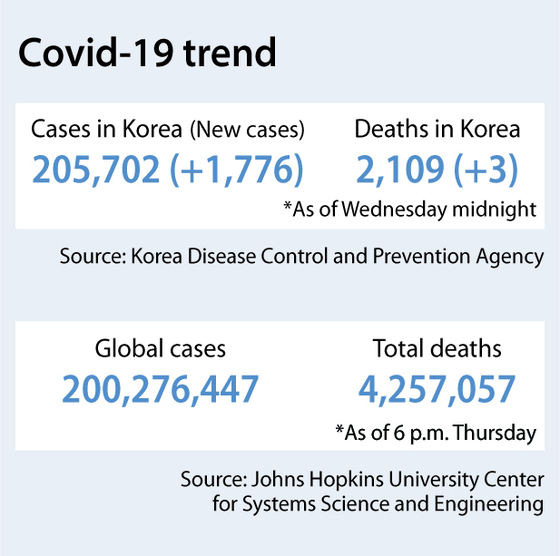 Two more deaths were added, bringing the death toll to 2,109.