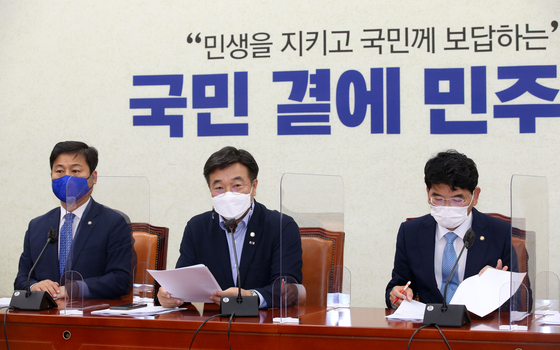 
The ruling Democratic Party (DP) on Tuesday said they would push to pass legislation within the month to designate alternative days off for public holidays that fell on weekends.

If the revision passes, alternative holidays will be applied from the second half of this year, which will make up for Liberation Day (Aug. 15), Foundation Day (Oct. 3), Hangeul Day (Oct. 9) and Christmas (Dec. 25) which fall either on Saturday or Sunday this year.

"We will give you back the lost 'red days,'” DP floor leader Yun Ho-jung said at a party meeting on Tuesday, using the term "red days" to refer to national holidays. “We will promptly pass a pending alternative holiday bill at the National Assembly within the provisional June parliamentary session.”

Rep. Yun continued, “Korea has become an advanced country, enough to be invited to the G7 summit for two consecutive years, but the labor hours of workers are still the second longest among the OECD member nations,” adding that the designation of alternative holidays is an “irreversible call of the times."

Rep. Yun added that the extra holidays are expected to pump an additional 4.2 trillion won ($3.75 billion) into the economy and can create 36,000 jobs.

According to a survey commissioned by Rep. Seo Young-kyo of the DP, seven out of 10 Koreans are in favor of expanding the possible alternative holidays.

Out of 1,012 respondents, 72.5 percent agreed with the idea of applying the alternative holiday system to public holidays that fall on weekends.

The Public Administration and Security Committee of the National Assembly will hold a public hearing on Wednesday to gather opinions and begin a full-fledged review of the bill.