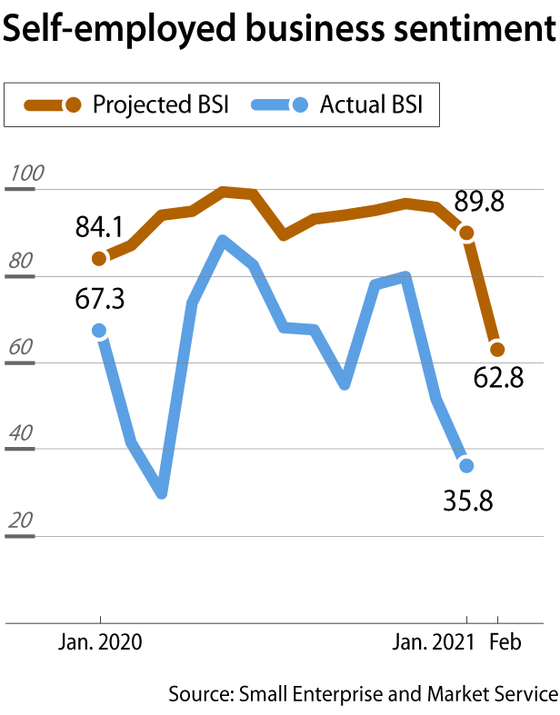 Kim Ji-min owns a fusion restaurant in Mapo District, western Seoul, and the pandemic has her in a quandary. She doesn’t really know whether she should stay open during the four-day Lunar New Year holiday or not.

“There won’t be many customers, but I can still accept orders from the delivery app,” she said.

There are many self-employed business owners like Kim, who are willing to open their businesses during the holiday. Even though there is not much business, they are faced with the pressure that they need to make a little bit of profit.

As the coronavirus pandemic drags on, the self-employed business owners are feeling the economic blow more harshly than ever. According to the Small Enterprise and Market Service (Semas), a division of the Ministry of SMEs and Startups, the business survey index (BSI) for the self-employed sector recorded 35.8 in January, which is 15.8 points lower than December 2020.

A BSI reading above 100 means there are more companies that are optimistic about the economy, while a reading below the benchmark signals there are more pessimists than optimists.

“The self-employed businesses expected that the economy will worsen because the social distancing measures have been limiting people’s movement,” Semas said.

For the hospitality and aviation industries, the holiday used to be the most profitable season before the coronavirus pandemic hit. There was always news about hotels and resorts being completely sold out, and there were record numbers of people flying out of the Incheon International Airport. This year, the situation is starkly different — the tourism industry has been going through a severe depression. When the Level 2.5 measures are in place, hotels can only run at two-thirds capacity.

“Forget about the two-thirds rule. Most hotels in the downtown area are probably not even at 30 percent,” said an employee at a local hotel who wished to remain anonymous. “Besides some hotels on Jeju Island, most hotels in the country are in similar situations.”

Korean Air will not utilize its extra flights that are usually planned during the Lunar New Year holiday. Most routes are running at 20-percent capacity.

“There are some customers for the Jeju route, but it is not even remotely comparable to last year,” said a spokesperson for Korean Air. “Recovery will not be possible unless vaccines are distributed promptly or the coronavirus pandemic subsides.”

There are people that are adamant about visiting their extended families even with the risk of paying a 100,000 won fine for violating the rules.

“The government has been ignoring mass infections at certain religious sects, and they are passing on the blame on the citizens and the self-employed population,” said Kim Young-hak, an employee of a financial securities firm in his 40s. “I couldn’t see my family during last year’s Chuseok. Even if I have to pay the 100,000-won fee, I am thinking of visiting my parents during the holiday.”

Some businesses are faring way better than others during the pandemic, especially convenience stores and major supermarket chains. Korea Seven, operator of Seven Eleven, is figuring out which days its chains will close during the holiday. During last Chuseok, around 700 of its 10,000 stores took more than one day off. The company projected that fewer stores will close during this year’s holiday as consumers may visit their neighborhood convenience stores amid the social distancing measures in place.

“Consumers now need to spend more time in their neighborhoods instead of going afar in the country or abroad,” said a spokesperson for a major supermarket. “Sales of food items are expected to increase.”