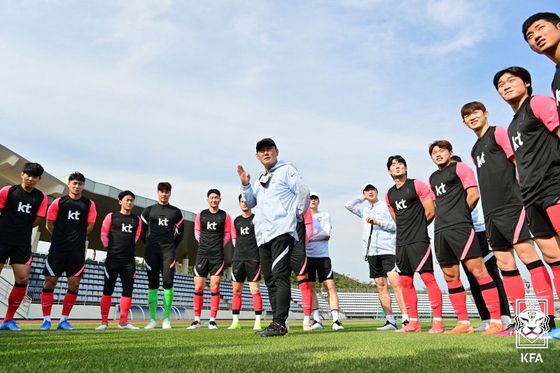 Kim Hak-bum, center, talks to players during a training session on Jeju Island on June 1. [NEWS1]


Kim Hak-bum, head coach of the Korean U-23 Olympic team, will start a second round of Olympic training on June 22 before announcing his final entry for the games, including the three wildcard spots, on June 30.

According to the Korea Football Association on Tuesday, the second round of training starting on June 22 will include 23 players, slightly more than the 18 that will be included in the final entry for the Tokyo Games.

The three wildcard players — aged over 23 — will also be announced on June 30.

The KFA now has to seek permission for Kim Min-jae, the formidable center back known as The Monster, to be allowed to join the team for training, rather than heading back to Beijing, where the season is ongoing.

Son and Hwang have both finished their seasons, while Kwon plays for a Korean team.