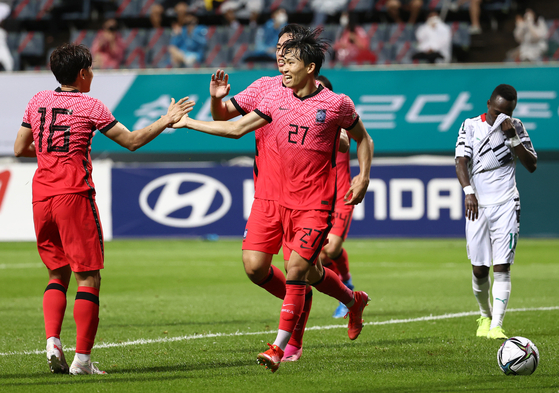 Jeong Woo-yeong, center, celebrates Korea's first goal with his teammates during the first half of the pre-Olympic friendly against Ghana at Jeju World Cup Stadium in Seogwipo, Jeju on Tuesday. [YONHAP]


The Korean U-23 squad beat Ghana 2-1 in a second pre-Olympic friendly on Tuesday at Jeju World Cup Stadium in Seogwipo, Jeju.

As bigger names like Paik Seung-ho, Lee Kang-in and Won Du-jae had sat out an earlier clash between the two teams last week, head coach Kim Hak-bum again used all seven available substitutions during Tuesday's game to see all players perform on the field before he announces his final entry for the Games.

The focus on individual performance over teamwork was clearly intended to help Kim choose who would make the starting Olympic squad, but at times it meant Korea missed opportunities as players looked to shine on their own rather than work together.

Korea was on the offensive in the first half, managing two shots on target within the first eight minutes.

The first shot of the game came from Jeonbuk Hyundai Motors midfielder Paik just before the fifth minute, but the opportunity fell short as the ball headed straight to the Ghanaian goalkeeper.

The second chance came from FC Seoul striker Cho Young-Wook, who attempted a header in the seventh minute.

Korea kept up the offense, keeping the ball within the Ghanaian half for more of the opening 30 minutes.

The video assist referee(VAR) was first deployed in the 32nd minute, when the referee reviewed footage to see if the ball had made contact with a Ghana player's hand in front of the net. Though the video proved contact had been made, the referee ruled it was unintentional.

Korea pulled ahead toward the end of the first half, when Freiburg striker Jeong Woo-yeong picked up a rebound off the post and slotted the ball into the net.

Despite their lead, Korea struggled to hold together a strong backline, allowing Ghana to seize the momentum and go on the attack.

Ghana repeatedly threatened the Korean goal in the dying minutes of the first half, but neither team was able to get anything across, going into the break with Korea up 1-0.

The second half saw four changes on the Korean side as Lee Seung-woo took over for Jeong, Lee Dong-gyeong took over for Lee Kang-in, Kim Jin-ya for Kang Yoon-sung and Um Won-sang for Oh Se-hun. Kim Jin-ya would have been ineligible to play in a tournament setting after being sent off last week, but as the game was a friendly, no such suspensions counted.

Ghana got started quickly in the second half, going on the offensive immediately to quickly get back into the game.

Ghana's chance came in the 50th minute, when Korea gave up the ball deep in the midfield, allowing an opposing defender to fire a long cross up the field to Joseph Vance, who dribbled through the defense and caught goalkeeper An Chan-gi off his line to take the score to 1-1.

Korea's counterattack was quick, but it took a series of missed opportunities before the young Taeguk Warriors finally found the back of the net, with a goal from Lee Dong-jun in the 64th minute. 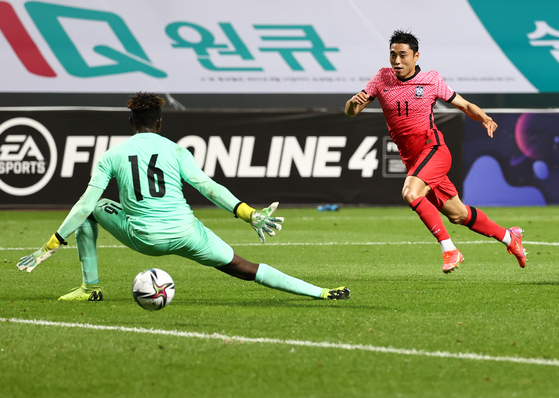 Lee Dong-jun kicks the ball past the goalkeeper, slotting in the winning goal during Korea's pre-Olympic friendly against Ghana at Jeju World Cup Stadium in Seogwipo, Jeju on Tuesday. [YONHAP]


Lee's goal proved crucial, giving Korea a 2-1 lead with 25 minutes left to play. Neither side was able to add to the score, and the game ended with Korea one goal ahead.

Ghana left the pitch with 10 men, after midfielder Jonah Attuquaye received a red card for an intentional foul on Lee Seung-woo, hitting the Korean attacker on the face while attempting to tackle him. The play was reviewed on VAR before the foul was given, mimicking the exact circumstances that Kim Jin-ya was sent off in during last week's game.

The two results, totaling 5-2 on aggregate, are solid wins for the U-23 team in their first pre-Olympic friendlies.

The Ghanaian U-23 team lost 6-0 to Japan earlier this month, a score that Korea might have liked to replicate at Jeju World Cup Stadium. But Kim Hak-bum is still building his squad — Korea made seven substitutions to Ghana's three — the 2-1 result is still a victory for a young team that is yet to really start working together.

The current U-23 squad will form the backbone of the team that plays at the Tokyo Olympics next month, with the addition of a few players that have been on duty with the senior national team and three wildcards.

Korea has seen success at the Olympics recently, winning bronze at London 2012 and coming fifth at Beijing 2016.

This year Korea ought to have an easy path to the knockout stage, having been drawn in Group B alongside New Zealand, Honduras and Romania. They will play their first match on July 22 against New Zealand.

Head coach Kim will now start a second round of Olympic training on June 22 before announcing his final entry for the games, including the three wildcard spots, on June 30.

According to the Korea Football Association on Tuesday, the second round of training starting on June 22 will include 23 players, slightly more than the 18 that will be included in the final entry for the Tokyo Games.

The three wildcard players — aged over 23 — will also be announced on June 30.