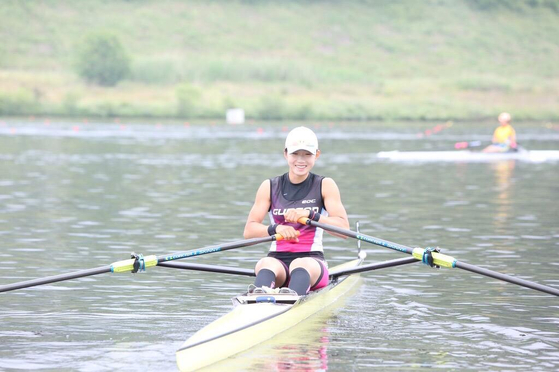 
Korea will send a solitary rower to the 2020 Tokyo Games as the country continues its 57-year search for an Olympic medal in the event.

Jeong Hye-jeong will fly the flag for Korea, making her Olympic debut in the women's singles sculls event.

There are 14 Olympic rowing events, seven each for men and women divided by the number of people in the boat and the style of rowing. In rowing, unlike in many other sports, men and women have the exact same events.

In sculls events — single, double and quadruple — each rower uses two short oars to propel the boat through the water. This differs from the coxless pair and coxless four events, both sweep events, where each rower has one long oar and they work in unison to move the boat forward.

The final two disciplines are eights, where eight rowers use a single oar each under the guidance of a coxswain sat at the stern of the boat, and lightweight double sculls, which is the same as the regular double sculls events except that the men’s team has to have an average weight below 70 kilograms (154 pounds) and the women’s team below 57 kilograms.


All Olympic rowing races are all raced over 2,000 meters. In Tokyo, the races will be held in the purpose-built Sea Forest Waterway, the venue for both rowing and canoeing events at the Games. Situated on the artificial island of Odaiba in Tokyo Bay, the course uses water from the bay held at a consistent depth using dams at either end.

Korea has competed in rowing events at the Olympics since 1964 Tokyo Olympics, when nine athletes, all men as women weren't allowed to compete at the time, competed. It wasn't until 1984 that Korea next fielded a rowing team at the Games, with athletes sent to compete in the event at every Olympics since then.

Korea has never won an Olympic medal in rowing, but has won one gold, 14 silver and 21 bronze at the Asian Games. 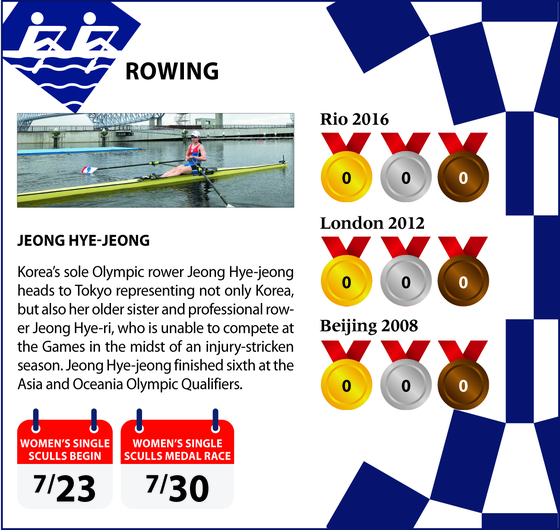 This year Jeong will attempt to change that record, but she faces an uphill battle to do so.

Jeong finished sixth in the women's single sculls in the rowing Asia-Oceania qualifying round at the Tokyo Olympics from July 5-7 with a time of 8:05.55, 22.42 seconds behind Shiho Yonekawa of Japan in first place.

Japan, having qualified for the women's lightweight double sculls, opted not to use their host position in the women's single sculls race, allowing Korea to take one of the six slots available for qualifiers from the Asia-Oceania qualifying competition.

Jeong will represent not only Korea in Tokyo, but also her older sister Jeong Hye-ri, a professional rower that failed to qualify for a spot in Tokyo in the midst of an injury-stricken season.

"My sister was happier than I was when I heard about her winning the Olympic ticket today," Jeong Hye-jeong told Yonhap. "I'm the only rower to be on the Olympic stage, and I'll participate in the competition with the idea of participating with my sister."

The women's single sculls event will start with heats on July 23. The medal race will be on July 30.