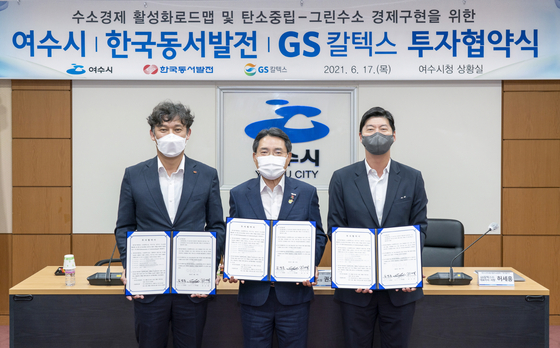 Oil refiners, typically one of the industries with the highest carbon emissions, are ramping up their efforts to go green.

GS Caltex, in partnership with Korea East-West Power, said Thursday it will invest 100 billion won ($88 million) in the city of Yeosu, South Jeolla, to build a hydrogen fuel cell power plant with a 15-megawatt output by 2023.

The oil refining company said the capacity will be enough to power some 50,000 households once completed.

SK E&S, 90 percent owned by SK Holdings, in March said it will invest 500 billion won to build a liquefied hydrogen factory in Incheon by 2023 that is able to produce 30,000 tons of liquefied hydrogen per year. This is part of an 18 trillion won investment SK plans to make in the hydrogen business over the next five years.

Liquefied hydrogen, which is more convenient and safer to transport compared to its gaseous form, is expected to be more useful in the future when demand for the eco-friendly energy increases.

Hyundai Oilbank is focused on producing blue hydrogen, which is a type of hydrogen produced from fossil fuels that utilizes CCS technology to minimize emissions of carbon dioxide into the air.

Hyundai Oilbank recently formed a partnership with local chemical company Shinbiochem, where the oil refiner will provide carbon from its existing hydrogen factory to Shinbiochem to manufacture other value-added products such as dry ice.

Hyundai Oilbank plans to supply some 200,000 tons of carbons capture from hydrogen manufacturing to Shinbiochem per year.

The oil refiner is also expanding infrastructure to distribute blue hydrogen. It is planning to supply 100,000 tons of blue hydrogen to hydrogen chargers and fuel cell systems by 2025.

As a first step, Hyundai Oilbank is establishing facilities that can reform blue hydrogen to be more suitable for vehicles at its Daesan refinery in South Chungcheong. The facility, once completed, will be able to reform 3 tons of hydrogen per day, enough to power 600 Hyundai Motor Nexo SUVs.

S-Oil only recently jumped into the hydrogen business. In March it acquired 20 percent of Fuel Cell Innovations (FCI), a joint venture between Korea and Saudi Arabia that specializes in clean energy based on fuel cells.

FCI plans to invest 100 billion won to expand its hydrogen business by 2027, including building hydrogen production facilities with more than 100-megawatt capacity.