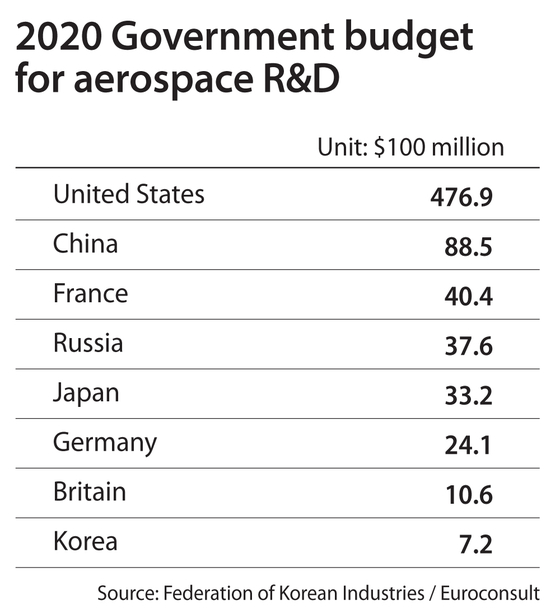 The government needs to invest more time, money and manpower in the aerospace industry, the Federation of Korean Industries (FKI) said Thursday, warning that other advanced economies are far outpacing Korea in the sector.

On Thursday, the FKI, a lobbying group for local companies, published a report that compared Korea’s efforts to boost the aerospace industry to seven other countries: China, the United States, France, Russia, Japan, Germany and Britain.

Korea was at the bottom of practically every standard measured in the study: Government budget, R&D investment of private companies, size of workforce and level of technology.

The FKI also noted that Korea did not have a separate administrative body that oversees aerospace technology and support for the industry. At the moment, a division under the Ministry of Science and ICT is handling the job.

All seven countries in the report have independent organizations overseeing the task of boosting their respective aerospace industries.

Korea’s national aerospace committee is headed by the science minister, while the vice president heads a similar organization in the United States and the prime minister runs the Japanese version.

The U.S. government-owned National Technical Information Service said in a 2019 report that Korea’s level of aerospace technology fell far behind China and Japan. On a scale that set the United States’ aerospace technology at 100 points, China scored 89, Japan 86 and Korea 60.

According to the FKI, Korea has been missing out on a big opportunity. The average development period for aerospace projects is 10 years —longer than 5 years for shipbuilding and 3 years for cars — meaning it can create stable, long-term jobs with more research position available than other industries.

“Despite its importance, Korea falls behind global competitors,” the lobbying group added.

The FKI says Korea's first priority should be establishing an independent organization that involves higher-rank officials on the initiative.

“Government budgets should be extended from the current $700 million level to at least $3 billion like Japan, with the workforce increasing as well,” it said.

“There should also be more support for private companies or start-ups to realize innovation, as SpaceX did in the United States by reusing planes. What we need is a drastic paradigm shift where aerospace R&D is mainly led by the private sector, instead of the government and state-run research centers.”