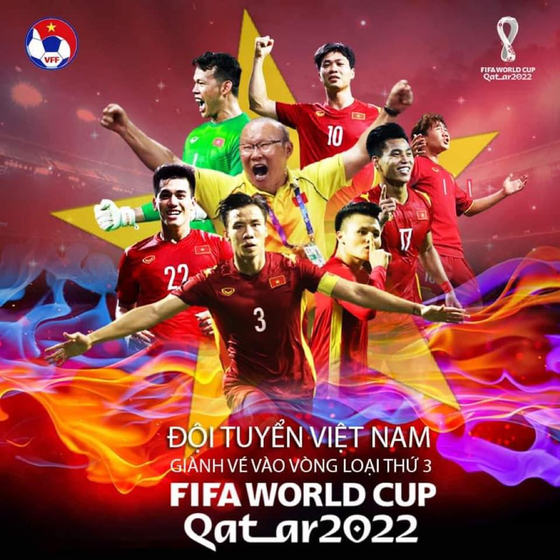 A social media post from the Vietnam Football Federation congratulates the Vietnamese national football team and Park Hang-seo, center, for reaching the third round of Asian qualifiers for the 2022 Qatar World Cup. [YONHAP]


Vietnam has hit yet another historic milestone under the leadership of national football team head coach Park Hang-seo.

Vietnam on Tuesday qualified for the third round of Asian qualifiers for the 2022 Qatar World Cup, the closest the Southeast Asian country has ever got to the world's biggest football tournament.

Vietnam finished second in Group G, trailing behind the United Arab Emirates in first place, but qualified as the fourth-highest ranking runner-up team, with 17 points.

Park's team ended the tournament with five wins, two draws and one loss, only one point behind the UAE's six wins and two losses. Their only loss came in their final game on Tuesday, when they fell 3-2 to the UAE.

Vietnam now joins 11 other teams in the third round of the tournament. The top team from each group in the second round qualified for the third round, alongside the five best second-place teams. The 12 teams will be sorted into two groups of six on July 1, with matches to be played in September.

The top two teams from each of those groups will immediately qualify for the World Cup, while the two third-placed teams will play each other for the right to compete in the inter-confederation playoffs.

The order teams are drawn will be based on a special ranking to be announced by FIFA today, but as things stand, Vietnam rank 92nd in the world, putting them among the bottom qualifying teams.

"We have achieved another goal," Park said in a virtual press briefing on Wednesday. "Now we have to keep working to achieve the next step."

Reaching the third round of World Cup qualifiers is just the latest thing on the ever-growing list of Park's achievements with the Vietnamese national team.

Unsurprisingly, Park, who formerly managed the Korean U-23 team, is something of a hero in Vietnam. His magic touch is legendary and he's got the paperwork to prove his value — the new contract he signed at the end of 2019 is the biggest Vietnamese football has ever seen. He has received two different orders of merit in Vietnam in recognition of his contribution to the country.