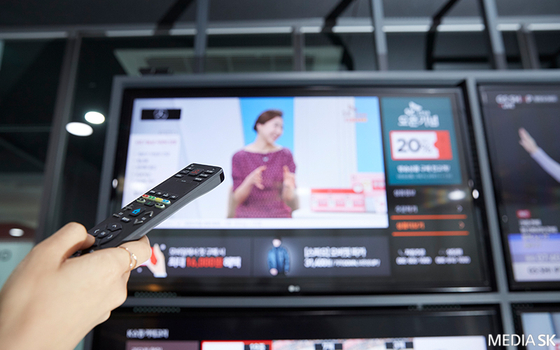 
In 2005, the Korean government licensed 10 companies to engage in T-commerce, which is similar to home shopping.

The difference is that T-commerce customers can choose what items they want to buy using their remote control.

This is possible because shows on T-commerce channels are not aired live, but are pre-recorded videos that last 20 to 30 minutes per item. Viewers are not under a time restriction, as opposed to TV home shopping where they can only buy products being aired at that moment.

According to the Korea T Commerce Association (Kotca), T-commerce operators sold around 5.4 trillion won ($4.8 billion) worth of goods and services in 2020. This is a fivefold increase from 2016’s 997.7 billion won. The association forecasts this year’s annual figure to reach 6.8 trillion won.

The growth of T-commerce is notable considering its early years when TV sets in most local households at the time did not have the technology to support such a degree of user control. The rise of internet-protocol TV (IPTV) helped, which allows for more flexibility in TV control than just changing volume and channels.

There are currently 10 companies in the business. Five of them, like SK Stoa and Shinsegae TV Shopping, operate T-commerce channels only, whereas the other five are run by major TV home shopping operators like GS, Hyundai and Lotte Home Shopping.

The advance of T-commerce is evident in the performance of the home shopping operators. Between January and March, the on-year growth rate of their T-commerce sales of the three companies was between 23 and 49 percent, whereas the sales growth from the TV channels was below 2 percent.

A big boost for T-commerce came last year with the coronavirus pandemic. Under Korean law, T-commerce channels can only offer pre-recorded videos and are banned from airing shows live. This eliminates the suspense factor in TV home shopping and was a measure the government implemented to prevent complaints from older TV home shopping players.

But that handicap created a flexibility that benefitted T-commerce operators last year when the coronavirus first arrived in Korea. SK Stoa, for example, had recorded shows for masks in January to prepare ahead of a seasonal demand in March due to yellow dust. Those shows were used in January and February when mask demand skyrocketed.

To attract customers, T-commerce channels had to find more dramatic ways to catch the attention of viewers.

Last year, Shinsegae TV Shopping changed its production set replacing walls with LED screens. This reduced the time to prepare for a show to 15 minutes from 30. In late April, it launched what it calls the “Digital Studio 2.0,” where the company also changed the floors to be LED panels as well.

According to Shinsegae, the viewership of shows shot in the Digital Studio 2.0 is 15 percent higher than other studios where only the walls are LED.

In 2019, the company started providing TV shows on a cloud system, which helped it collect viewership data. Based on that information, SK Stoa developed a program last year that could analyze the relation of viewership, revenue and elements of the show, like which scene had the largest number of viewers or triggered orders.

With the development of smartphones and ecommerce technology, T-commerce operators are also finding ways to air their show live using mobile platforms. Airing live shows on T-commerce is banned but there are no restrictions for doing so on mobile apps.