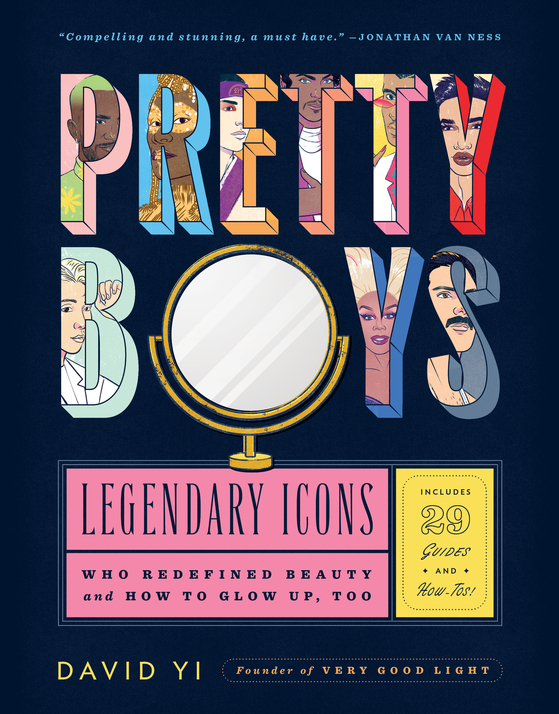 Cover of "Pretty Boys," a book celebrating the history of men and beauty, written by David Yi [DAVID YI]


Most male K-pop acts wear makeup — refining their skin tones with a BB cream and accentuating their eyes with eyeliners — so it’s not too awkward to see the men glisten and glow. But when such heavy makeup is worn by a regular male on the street, it still attracts people’s gaze — some staring in astonishment, some with a frown.

David Yi, a beauty editor and founder of the U.S. publication Very Good Light and beauty brand Good Light, may draw such gazes as he likes to put on some makeup, “using brow gels and filling my eyebrows in, using natural eyeshadow to accentuate the eyes, and sometimes curl my lashes if I have time.”

Growing up as a Korean American in Colorado, Yi says he learned at an early age what it feels like to be “the other and feeling invisible.”

Desperate to fit in, Yi says the younger boy version of him “hid behind a broken façade of aggressive masculinity,” wearing baggy jeans, deepening his voice and “pretending that I was anything but who I actually was.” 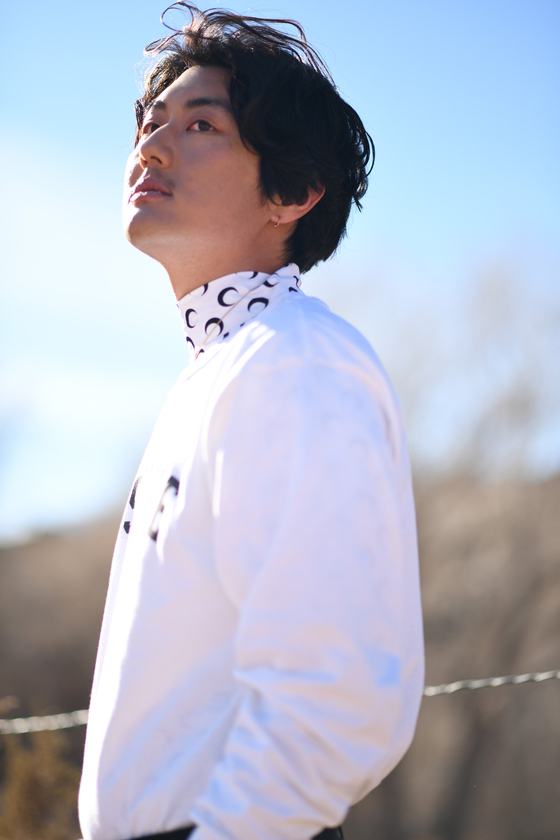 But after learning through history and male K-pop acts about “unmasked masculinity, which allowed men everywhere to rethink makeup,” Yi says he became a confident and proud “pretty boy.” Hoping to empower people by proving that “beauty, cosmetics and skincare has no gender" and that "people from all backgrounds used it to amplify their power,” Yi is set to publish his first book “Pretty Boys” on June 22, celebrating the history of men and beauty.


“While the Western world has been coming to grips with the gender binary under oppressive patriarchal rules more recently, Korea has celebrated men and makeup on and off throughout history,” he writes. Throughout his book, the author shares his insights on the history of men, makeup and masculinity from the beginning of time until today, while introducing some of the latest beauty tips used by male K-pop acts like Pentagon.

What led this pretty boy to lose himself in K-beauty and go further to empower people, regardless of their gender, to feel free to beautify? The Korea JoongAng Daily interviewed Yi, who currently resides in Colorado, via email to hear more about his new release and K-beauty. The following are edited excerpts from the interview.


Q. What got you into researching about the history behind beauty and makeup that goes beyond the binary?


A. I've always been interested in the gender binary and why certain acts are considered feminine or masculine. For instance, the colors blue and pink were originally pink for boys and blue for girls. Why is it that that changed? The same applies to makeup — why is it that it's become an act associated to femininity or women when traditionally that's never been the case? Makeup and skincare has no gender identity.

They are products used to empower and elevate — I wanted to make a case for this throughout history, the world and traditions. Everyone wants to feel beautiful, everyone wants to feel empowered. And makeup and beauty — from the inside out — only makes a person more powerful.


When was the first time you were fascinated with beauty and makeup?


I grew up in Colorado Springs, Colorado. There weren't so many Koreans in my city back then, and I grew up sometimes being the lone Asian person. With so much racism and xenophobia, my immigrant Korean parents, mother, Shin Sun-chin, and father, Yi Sung-yong, faced so many obstacles. When I was five years old, I remember watching both my mother and father slather their skin with skincare. Whether it was a cream or a sunscreen, both took pride in pampering themselves. At first, I was confused — why were they so obsessed with these elixirs, creams?

But in retrospect, as I'm older, I realize it was a means of survival. It was self-care and self-actualization. They were caring for themselves in those five minutes in the morning to get ready for the day and to have that time to themselves before the end of the night. It allowed them to take care of themselves while no one else was. They were fending for themselves in a cruel, racist country while celebrating themselves by poring over their pores and looking in the mirror, preserving their heritage, remembering who they were, being proud of their ancestry.


When did you first wear makeup?


I first started wearing makeup after I moved to New York City after college. I remember there being so much freedom in the fashion and beauty industry. The first product I used was BB cream, as I read G-Dragon from Big Bang wears it and was curious with his eyeliner. I bought my first — NYX Cosmetics — and started drawing mine on as well. Seeing someone as powerful as G-Dragon and observing how he was confident inspired me to do so as well.

Growing up with conservative Korean parents, I’m curious what their reaction was when they saw you pampering yourself and even wearing makeup. What was their first reaction, and how do they respond now?

My parents at first were curious. Then I think they were interested in why I was doing so. I think there's fear with every parent and trying to protect their children from people at church or their neighbors. What would they think? I feel they've come around to understanding that beauty and makeup has no gender, and powerful people — like the Hwarang of Silla Dynasty [57 B.C. to A.D. 935] — all used makeup to amplify their power and for confidence.

Boys whose attractiveness is considered rather effeminate used to be called “pretty boys.” How do you feel about that statement?

The reason why people would call others pretty boys in a facetious way is to take away one's agency. It was used to make a man feel inferior, or "like a woman." At the core of it, that is misogynistic. Why is it that in our culture we deem effeminate behavior as weak, or less than, but if a woman is a "tomboy" or can change a tire, we deem that as something powerful?

I think at the core of it, many cultures are still misogynistic at their core and think of traditional women's behaviors as weak — and I think that needs to change. Being a pretty boy ultimately means you own who you are, you own your agency, you walk into your light for everyone to see — you are authentic and unapologetic. The definitions of what we perceive as a "pretty boy" today and masculine is constantly changing, and I hope that we understand that masculinity is expansive. It isn't about your physical strength, your machoism, or gruff nature — being masculine is walking in your light, being authentic and embracing who you are. 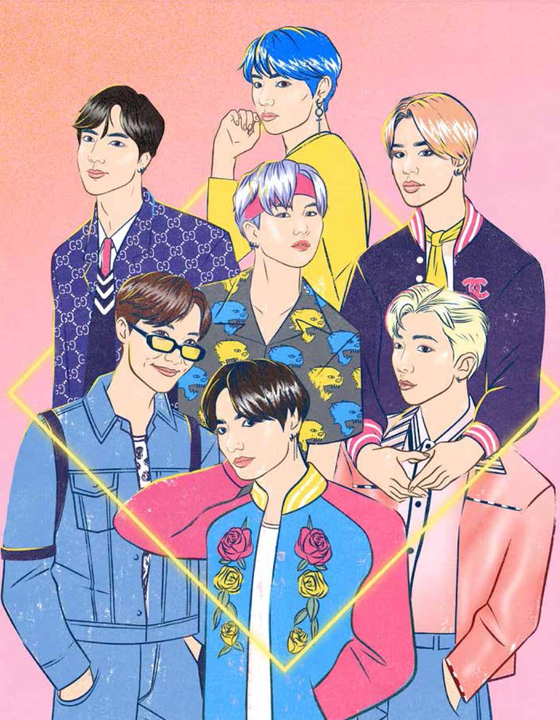 
In your book, there’s a chapter on BTS as one of the icons that have changed the perceptions on beauty. Can you explain more about the chapter?

There's a chapter about how BTS has changed perceptions — worldwide — on Asian masculinity and beauty. They've fought against xenophobia, racism, Western standards of beauty — and prevailed. They won. They continue to challenge preconceived notions of what is and isn't masculine and beautiful, and we should all be so grateful towards them. They've had so many challenges, adversities, but they still came up on top due to their authenticity.

BTS member RM is featured as an illustration on the cover of your book. Why RM among all the other members?

First of all, I wanted to choose all historic men of color [to be featured on the cover], so we can dismantle this idea that Whiteness equates to the ultimate standard of beauty, which is untrue. We are all beautiful — all of us no matter our backgrounds.

I wanted to celebrate diverse and powerful people outside Whiteness. RM was important and essential for the cover because he doesn't fit Western standards of beauty or Korean standards. What he does is pave his own path and prove that he defines his own greatness, his own beauty. If beauty is in the eye of the beholder, RM proves we — all of us — are the beholder. We have the power in our own hands, and RM proves just that. 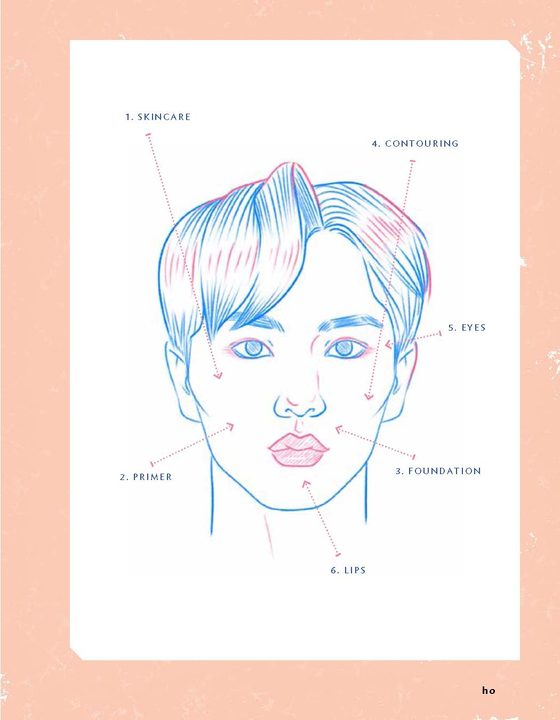 There's a chapter in the book that illustrates the latest beauty tips used by K-pop boy band Pentagon. [DAVID YI] 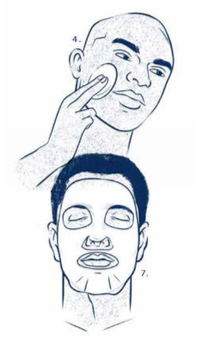 The book gives tips on how to get an at-home facial. [DAVID YI]

In your book, you delve into iconic figures who have changed the perception of beauty and how they beautified themselves using makeup. Who are some of the figures you go through?

Some figures include Neanderthals from 50,000 B.C. who used foundation, ground pyrite for highlighter; 3200 B.C. Babylonian warriors who went to a salon, curled their hair and matched their fingernail polish to their hair color before battle; Pharaoh Ramses, who beautified in the day with dozens of servants who styled him before he started his day; K'inch Janaab Pakaal, a Mayan ruler who went through plastic surgery to elongate his head to resemble corn, a sign of deity and godliness; and so much more.

Of course, Korean beauty is essential to this book! Koreans have beautified for centuries, and we trace this back to the Hwarang of the 600's Silla Dynasty. They were fierce, they were beautiful and they also wore makeup. We have so many chapters on Korean beauty, from BTS and their rise to power, K-beauty and K-pop history, and of course, the Hwarang.

Why do you think Korean beauty has gained so much popularity in the U.S. market?


The innovation. Korean beauty is light-years ahead of the U.S. and other markets in terms of new ingredients, textures and technology. The U.S. has finally discovered the power of K-beauty and it's no longer a trend — Korean beauty is here to stay.

Your beauty brand Good Light represents those beyond the binary. Can you tell us the story behind establishing such an embracing brand?


It's all about promoting diversity, inclusion and freedom of expression. The brand is for everyone no matter their gender identity. It's important to understand beauty products have no gender identity — they are for all, they are democratic. They should be used to empower and uplift, to inspire. I've always been an activist and advocate. When I was younger, as the only Korean American in school, I've always felt like the other. I've always felt invisible. Asian Americans were never lauded or celebrated. I know what erasure feels like. I want everyone to know they exude "good light," they are essential to life, they are beautiful and worthy. No matter who you are or your background, we want to celebrate you at good light. 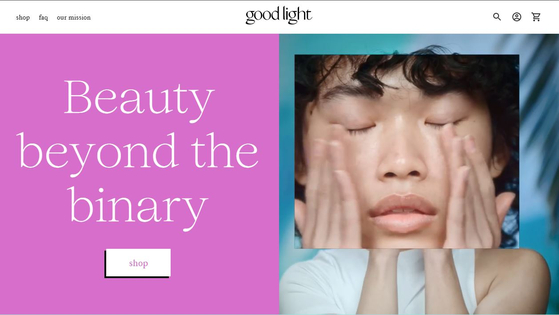 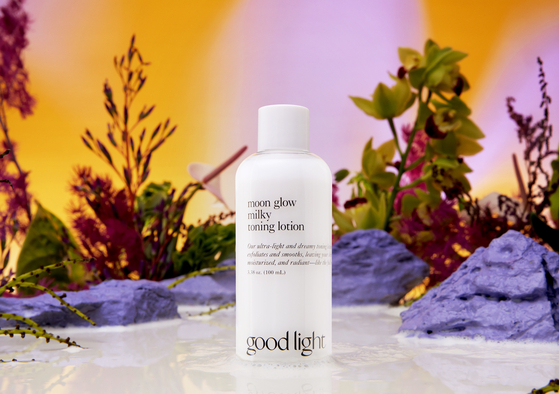