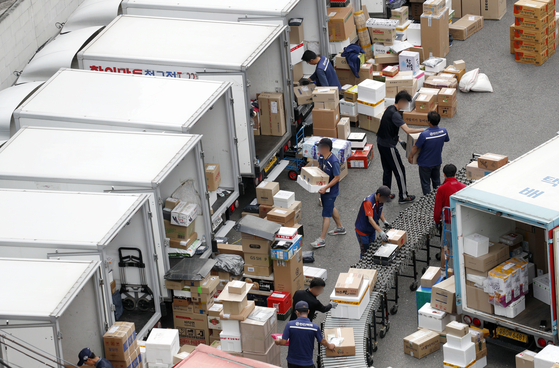 
Workers doing deliveries for CJ Logistics will be able to choose how many packages they want to handle each day.

The company announced Tuesday it was adding a clause to the standard contract for delivery workers that guarantees more rights over their workloads.

CJ will be the first logistics company to put such practices in writing. Similar agreements have been done verbally between delivery workers and logistics centers.

Working conditions surrounding delivery service have been criticized after some drivers died from overwork, especially after demand skyrocketed with the coronavirus lockdowns, which prompted people to purchase more online.

Under CJ Logistics' new contract, workers can discuss with the logistics center adjustments to their daily workloads. Some jobs can be allocated to adjacent centers.

“This new system is possible because delivery workers are under a different contract from workers on a 52-hour workweek, and their incomes are calculated on the number of packages they deliver,” explained a spokesperson from CJ Logistics.

This means workers can be paid less if they decide to cut their workloads.

CJ also plans to check working conditions for delivery staff from next month and come up with measures to improve them. 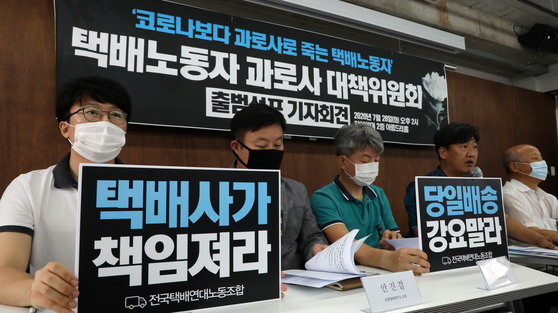 Union members speak at a press conference for a committee to put an end to delivery workers dying from overwork at the People's Solidarity for Participatory Democracy building in Jongno District, central Seoul, Tuesday. [YONHAP]


On Tuesday afternoon, workers affiliated with the Korean Confederation of Trade Unions held a press conference to launch a committee to prevent more occupational deaths in the future at the People's Solidarity for Participatory Democracy building in Jongno District, central Seoul.

“Delivery workers receive fees per parcels delivered. The recent change from CJ is nothing but a cut in wages, as workers still have to work long hours sorting parcels at logistics centers without payment,” said Kim Tae-wan, head of the delivery worker’s union.

The workers said they wanted to raise awareness of the dangers of overwork and press the government and companies to come up with preventive measures.

Efforts to improve working conditions for delivery workers are also being undertaken by the government.