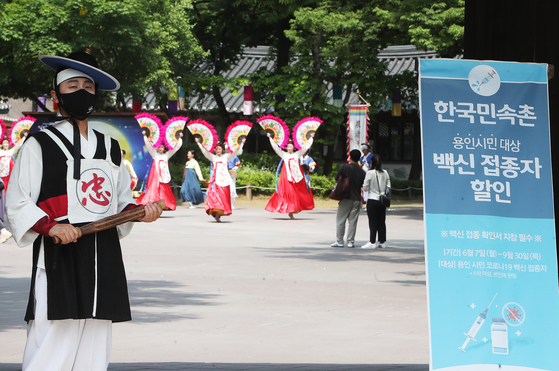 Discount programs for the vaccinated continue to be rolled out across the land, with some doing away with all that jazz about actually getting a shot.

In late May, the Korean government announced that tickets to national recreation forests are free for those who are vaccinated or those who received their first jab starting June. People are also offered 30 percent discounts on tickets to the National Institute of Ecology in Seocheon County, South Chungcheong.

The government may expand the discounts event to many tourist destinations in Seoul, such as Changdeok Palace and Gyeongbok Palace.

Buddhist sites have joined in. Starting June, vaccinated people or those who received their first jab will be offered to 20,000 won ($17.6) off on all temple stay programs at 135 temples in the country. 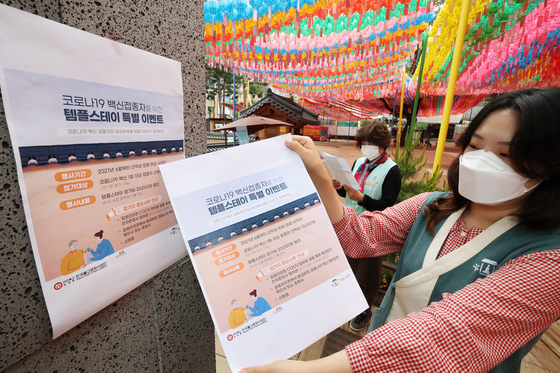 An employee poses with a poster about promotional event at Jogye Temple in Jongno District, central Seoul on June 1. Starting this month, vaccinated people or those who received their first jab will be offered to 20,000 won discounts on all temple stay programs in 135 temples across the country. [NEWS1]


People can participate 14 days after getting vaccinated, and the event is open to 10,000 people on a first-come-first-served basis, according to the Cultural Corps of Korean Buddhism.

“About 500 people have already made reservations,” said Park So-young from Cultural Corps of Korean Buddhism.

High-end hotels are targeting those unable to get vaccinated due to their age and locked out of the discounts. People under 30 aren’t eligible for leftover vaccines.

Millennium Hilton Seoul is offering 50 percent discounts on its buffet for up to four people if at least one person in the group had been vaccinated. The event was originally set to run until June, but the hotel extended the promotion until August, with a 30 percent discount amid the attention it has been receiving from the public.

Conrad Seoul is offering a 30 percent off its buffet every Tuesday to Thursday until July 30.

The Courtyard by Marriott Seoul Times Square is offering its breakfast buffet at 100 won for customers who received Covid-19 vaccines, as well as their companions if they are staying at the hotel. Normally, the buffet costs 31,000 won per person. The event runs until July 31. 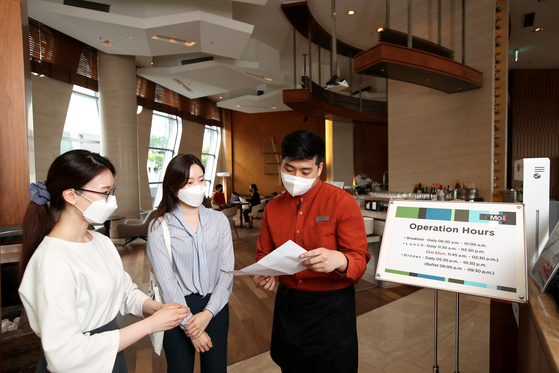 An employee of The Courtyard by Marriott Seoul Times Square talks to customers about a promotional event at its buffet restaurant in Yeongdeungpo District, western Seoul. The hotel offers breakfast buffet at 100 won ($0.09) for customers vaccinated, as well as their companions, if they are staying at the hotel. [JANG JIN-YOUNG]

“Reservations are being made mainly by people in their 30s and 40s who plan to spend summer vacation at hotels,” said Lee Dong-hui, head of promotion team at The Courtyard by Marriott Seoul Times Square.

Local governments are scrambling to come up with various promotions, mainly targeting their residents.

South Gyeongsang Provincial Government is also providing tickets to many state-run locations, like parks and art exhibitions, for free or sharply discounted prices for those who live in South Gyeongsang and have been vaccinated.

For some local governments, the promotional event is a kind of marketing strategy to promote their tourist locations, as well as to boost consumption.

Haenam County Office in South Jeolla rolled out a tour package targeting vaccinated people. The one-night-and-two-day package includes cable car tickets at Mount Duryun, a ticket to the Forest Arboretum and a visit to the Mihwang Temple.

The County Office said it offers 50,000 won discounts on the package for all people. Anyone who wants to make reservations can purchase the product via Romance Tour at 129,000 won per person, according to the government.