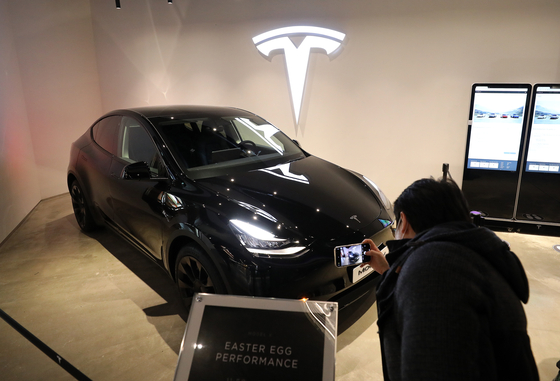 Tesla Model Y on display in Seoul in January [YONHAP]

Korea’s most popular EV has the least popular plug, meaning that drivers of Teslas may have trouble charging their rides.

“The CCS1 charging adapter, which was scheduled for sale in the first half of 2021, has been delayed to the latter half,” Tesla Korea said in a notice sent to its customers recently.

“Authentication for CCS1 charging adapter has been complete, and the company will try to make it available as soon as possible.”

Tesla vehicles have their own unique charging socket. To use public rapid chargers, an adapter is needed.

The DC Combo CCS1 is the most common type in Korea and has been selected as a sole standard for rapid charging in the country. 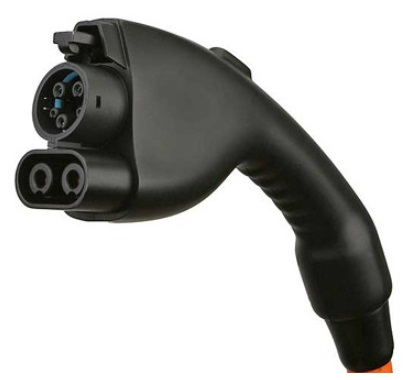 The latest EV models in Korea use the DC Combo type. This includes all recent electric models from Hyundai Motor and Kia, including the Ioniq 5 and the EV6, as well as imported models such as Mercedes-Benz EQC and Porsche Taycan.

Tesla has 33 of its own rapid Supercharger stations around the country, up from 14 in 2017.

To charge their cars rapidly, Tesla drivers either have to find one of these or find a DC Chademo rapid charger and have an adapter, which costs 445,000 won ($402).

Tesla owners can use most public slow chargers with an adapter, but refilling the vehicle can take more than five hours.

The inconvenience extends to the ultra-rapid charging infrastructure.

Tesla owners are not allowed to use the ultra-rapid chargers currently being built by Hyundai Motor in partnership with Korea Express Corporation and the Ministry of Environment.

The 350-kilowatt E-pit ultra-rapid chargers only connect with DC Combo plugs, and customers can’t use adapters for other types of sockets due to safety concerns.

Hyundai Motor plans to build 120 ultra-rapid chargers this year on highways and at major landmarks in cities.

Tesla is currently the biggest EV seller in Korea.

Tesla Korea reportedly plans to add its own 250-kilowatt ultra-rapid charging stations in Korea this year.