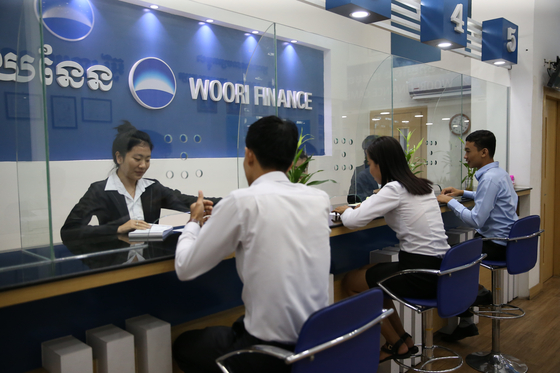 An employee advises a customer at WB Finance's branch in Cambodia. [WOORI BANK]

“We purchased an additional 45 percent of Indonesian Bank Bukopin at 70 to 80 percent under book value,” said Choi Chang-su, president and director of Bank Bukopin, who previously headed KB Kookmin Bank’s global business, during a shareholders meeting on June 17. “The Covid-19 pandemic became an opportunity for us.”

Bank Bukopin is the 14th largest bank in Indonesia by capital, with 435 branches. The bank faced a liquidity crunch during the pandemic, and KB Kookmin Bank, its second biggest shareholder at the time, pumped in a total of 400 billion won ($353 million) to acquire 67 percent stake and obtain control.

Following the acquisition, Fitch Ratings upgraded Bank Bukopin’s long-term rating to “AAA,” the highest level. Bank Bukopin’s shares traded at 188 rupiah (1.3 cents) before KB Kookmin Bank became its largest shareholder in June, but surged as much as 309.6 percent to 770 rupiah on January 11 this year.

The bank plans to make Indonesia into its "second mother market," enhancing its presence in the country with the help of other KB Financial Group subsidiaries, such as KB Kookmin Card, KB Insurance and KB Capital.

Other banks are doing well abroad. According to the Financial Supervisory Service (FSS), net profit of overseas branches of four commercial banks — KB Kookmin Bank, Shinhan Bank, Woori Bank and Hana Bank — was 575.3 billion won in 2020, up 31 percent on year.

Many of the overseas branches are centered in Southeast Asian countries such as Vietnam, Indonesia and Cambodia. The developing nations posted high economic growth rates of six to eight percent pre-pandemic, making them attractive markets.

“Not only do the [Southeast Asian countries] achieve rapid economic growth, but also have high demand for financial services, derived from having many young consumers,” said a spokesperson for Shinhan Bank. “They don’t have sufficient infrastructure to back high demand, which is why we expand into Southeast Asian markets such as Vietnam.”

Of Shinhan Bank’s overseas branch net profits of 234-billion-won last year, 143.2 billion was from Southeast Asian countries such as Vietnam, Indonesia and Cambodia. In Vietnam, the bank has been named as the number one foreign bank in terms of net profit.

Woori Bank plans to focus on Vietnam this year, and opened the Bac Ninh branch in April. Now operating 15 outposts in the country, including the Hanoi Branch and Ho Chi Minh City Branch, it plans to add five others by next year.

Wanting to go further than just serving Korean companies abroad, Korean banks are choosing to go digital to target locals. Banks are vying to be the leading banking app provider as mobile banking services are especially attractive for Southeast Asian countries, such as Cambodia, where bank accounts are few and smart phone many.

KB Kookmin Bank started Liiv KB Cambodia in September 2016, allowing users to simply transfer money to a phone number. It also acts like a digital wallet, and users can pay via the bank’s app at partnered stores. As of Tuesday, the app has 120,000 users.

On June 11, Hana Bank partnered with Japan’s Line to roll out a digital banking app in Indonesia.

Experts say banks need to maintain their competitiveness in the long-term, rather than focusing on short-term success.

“Banks need to apply long-term localization strategies and develop expertise in corporate financing,” said Kim Woo-jin, a research fellow at Korea Institute of Finance. “They need to do more than expand into overseas markets, but develop into multi-functional companies by also bringing in securities and insurance businesses as well.”

Open for business, sort of