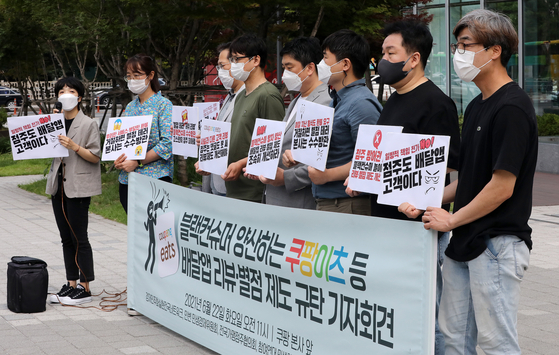 Civic groups and union members hold a press conference in front of Coupang’s headquarters in Songpa District, southern Seoul, on Tuesday, arguing against the review and rating system on the delivery app that results in abuse of power against restaurant owners. [NEWS1]


Embattled Coupang is at the center of yet another storm.

Its Coupang Eats is the subject of withering criticism after a restaurant owner died during a dispute with a customer and a follow-up phone call with the delivery service, which the customer had used to make the order.

The accusation comes less than a week after a deadly fire at a Coupang logistics center and in the context of repeated accusations against the e-commerce company, including claims of overwork and slipshod management.

According to an MBC report Monday, the restaurant owner, who was in her 50s and ran an establishment in Dongjak District, southern Seoul, died in the midst of a gapjil incident. Gapjil means abuse of power.

Civic groups, including the People’s Solidarity for Participatory Democracy, and the Korea Franchisee Union offered details during a protest in front of Coupang’s headquarters in Songpa District, southern Seoul, on Tuesday.

The customer ordered three pieces of fried shrimp on May 7 from the restaurant using the Coupang Eats app, they explained at a press conference, and called the restaurant the next day demanding a refund, claiming that one of the shrimp was a “strange color" after being in the refrigerator overnight.

The restaurant owner offered a refund for one fried shrimp, but the customer demanded a full refund, according to the civic groups and union members at the protest.

The customer is reported to have verbally abused the owner of the restaurant by insulting her parents and left malicious comments on the app with a one-star rating out of five stars.

“The case is an example that shows the seriousness of stress that restaurant owners suffer due to excessive demands by customers,” said Heo Seok-joon, chairman of the Korea Franchisee Union, during the protest on Tuesday. “It’s not just the customer’s problem. It is the problem of the Coupang Eats system that evaluates restaurants only on the reviews and ratings made by customers.”

Coupang Eats responded by saying that it will come up with a system that would allow for responses by restaurants to criticism.

“Coupang Eats sincerely apologizes for failing to give proper support to restaurant owners who have suffered due to excessive refund demands and malicious comments,” Jang Kee-hwan, CEO of Coupang Eats Services, said Tuesday. “Coupang Eats will listen carefully to the voices of all walks of life including restaurant owners and civil societies in order to solve the problem of the gapjil from customers.”