Im Ji-eun, 29, who runs a dessert cafe in Jongno District, central Seoul, recently got a part-time job as a delivery rider for Coupang Eats.

Im downloaded the Coupang Eats Delivery Partner app and registered her vehicle. Her first order was from a nearby chicken place. Using her Audi sedan, she picked up the chicken and delivered it to an apartment in Pyeongchang-dong, central Seoul. She earned 4,930 won ($4.4).

She worked for two days, five deliveries a day each. And about 50,000 won was paid into her bank account after two weeks.

“I first started delivery work as a part-time job because I was worried about my cafe as we never know when the government would shorten the operation hours again amid the coronavirus pandemic,” Im said. “Food is mostly delivered in an untact way, so all what I have to do is leave the food on people's doorsteps.”

More ordinary Koreans are considering food delivery as a short and easy side job to earn extra money.

Baedal Minjok, Coupang Eats, and GS Retail have been offering ordinary people a chance to work as part-time delivery riders, shorthand for people who drive their own vehicles to make deliveries.

Part-time delivery riders have to pay for their own transportation, unlike full-time riders who can rent motorcycles from delivery platforms, as they are given freedom to work during time slots of their choice. Some use their own vehicles, electric scooters, or even walk.

The number of registered part-time delivery riders with Baemin Connectors is about 50,000 as of December in 2020, a five-fold increase from 2019, of which 10,000 are actively working today, according to Baemin.

Woodel recruited delivery workers late last year, and more than 10,000 people have been registered, beating the company’s goal of 3,000. 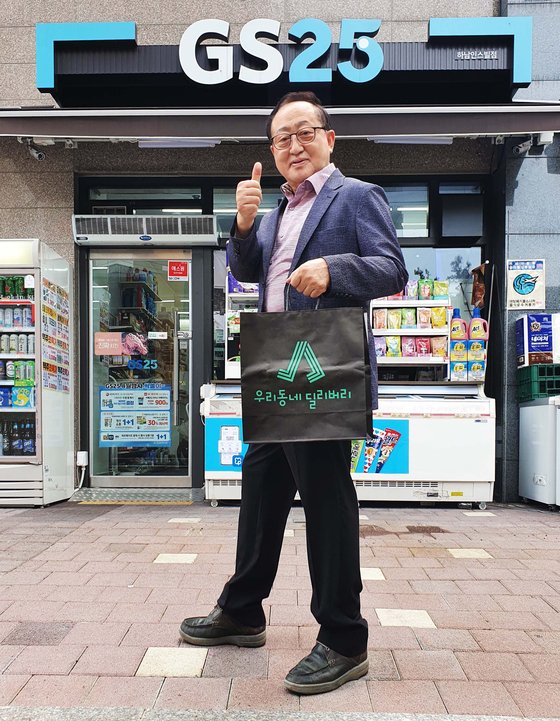 “I’ve even met an elderly in his 80s who has been working as a Woodel part-time delivery worker,” said a spokesperson for Woodel.

Coupang Eats has not revealed the exact number of its part-time delivery riders, but the number of people who do the work is estimated to be about 50,000 as of end of December.

“I’ve saw a woman in her 40s driving a Mercedes-Benz come to our restaurant to pick up a burger to deliver,” said a 38-year-old burger restaurant owner in Seongsu-dong, eastern Seoul.

Increasing demand for food deliveries is a big contributing factor.

According to data by Statistics Korea, the food delivery order transactions totaled 17.4 trillion won in 2020, up 78.6 percent compared to the previous year. Compared to 2017, when the statistics agency started collecting related data, the market size surged 6.4 times.

Coupang Eats introduced a system that only assigns one order per rider last year — aiming to enable faster deliveries — and this has become a turning point for delivery companies to recruit more part-time riders.

Coupang Eats delivery riders of all ages, from university students to elderly people, according to the company.

“Being a delivery rider allows me to earn some extra money at any time and at any places I want,” said 35-year-old office worker. “I only deliver during weekends, and I earn some 400,000 won to 500,000 won per month.”

In case of Baemin connectors, a rider gets paid an average of 3,500 won for every other that required a drive of 1.5 kilometers (0.93-mile) or less, as is paid an extra 500 won per 500 additional meters travelled. During peak times, such as lunch or dinner hours, riders generally earn 5,000 won to 6,000 won per order.

Korea has limited regulations to protect those part-time delivery workers from injuries that occur while working, experts say.

Under the Industrial Accident Compensation Insurance Act, delivery companies must take out insurance for their delivery workers to receive compensation if an industrial accident occurs.

But in case of Coupang Eats, the insurance only applies for delivery workers who work at least 118 hours per month and earn 1.2 million won a month. Anyone who works less than that has no way to receive compensation. As their transportation methods their own, they are responsible if any damages occur.

“With online shopping booming, having two jobs has become a new trend among Koreans,” said Seo Yong-gu, a business professor at Sookmyung Women’s University. “E-commerce market is likely to grow further, so related law or regulations should be reorganized according to the changing trend.”