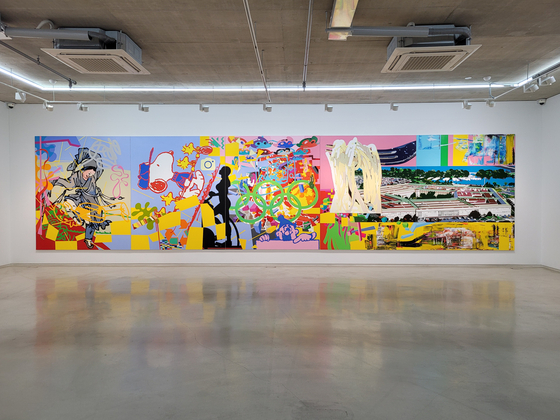 
Now at PIBI Gallery in Bukchon, central Seoul, a 10-meter-wide painting "Pentagon" (2019) hangs as part of the solo show of the famous Korean artist Lee Dongi. The painting is part of the 54-year-old artist’s “Eclecticism” series, which combines the diverse images the artist has encountered in everyday life, including those of comics, TV shows and ad campaigns, with brush strokes and color fields in the Abstract Expressionist style. Regarding the series, the artist once said, “I have some encyclopedic desire to express both the sublimity of abstract art and the realism of pop culture on the same canvas.”

The “Pentagon” painting depicts the character Atomaus, which the artist created in the 1990s by combining robot hero Atom from the Japanese anime Astro Boy, and Disney’s Mickey Mouse. Atomaus has since appeared in many of his paintings, including in Lee’s 2019 painting for the cover art of "Chicken Noodle Soup," a song by rapper J-Hope of K-pop superstar band BTS featuring American singer Becky G.