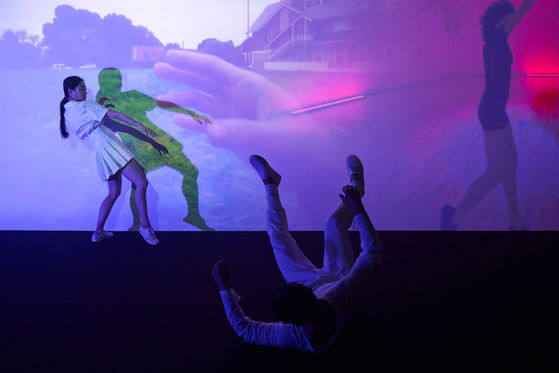 A performance at the contemporary art exhibition “The Middle Land: When Time Unfolds into Land” now running at the Arko Art Center in Daehangno, central Seoul. [ARKO ART CENTER]


The contemporary art exhibition “The Middle Land: When Time Unfolds into Land” now running at the Arko Art Center in Daehangno in central Seoul, is unique in at least two aspects.

First, the exhibition is completed by a performance which takes place ten times during the running period. Second, it is an exhibition selected through a contest among curators, highlighting their role, unlike most art exhibitions in Korea where curators are overshadowed by the participating artists.

The exhibition, which includes works by star artists such as Kimsooja, Kara Walker, Wu Tsang and Paul McCarthy, was curated by Zoe Chun, who was selected for this year’s Exhibition for Visual Arts by the Arts Council Korea, which operates the art center. She is the director of the Great Commission, a non-profit organization that facilitates the production of exhibitions, performances, and publications that “explore contemporary values through an eclectic hybrid of artistic genres,” according to Chun.

“Inspired by the ‘Middle-earth’ mentioned in the fantasy novels by J. R. R. Tolkien, this exhibition explores the meaning of space and place, which is a base for a complex life story comprised of both good and evil,” Zoo explained. “The exhibition engages with mental and spiritual narratives that implicate historical events.”

“Tolkien said in a letter to his readers that, although the narrative of Middle-earth may seem like a great hero's biography, its grandeur means nothing without the trivial and the ordinary,” she added.

In other words, the exhibition deals with the modern history and the contemporary society perceived and re-told as “small history” by individuals including marginalized people. Among the works is “Planted Names”(2002) by Korean artist Kimsooja, which is an installation of black carpets on which the artist wove the names of enslaved Africans who served in the Drayton Hall plantation in South Carolina, in white thread. Beside it a silhouette animation by American artist Kara Walker is projected. It is “8 Possible Beginnings or: The Creation of African-America”(2005) which tells the story of the Atlantic slave trade and slavery like a dark and horrible fairy tale. 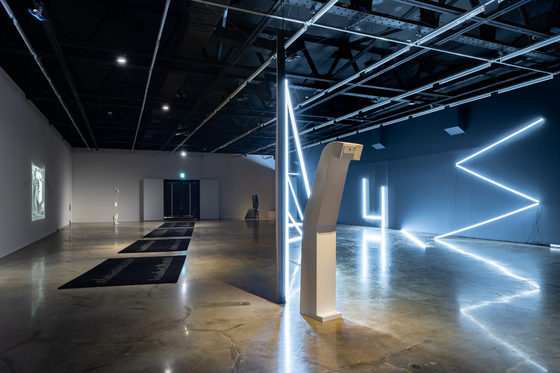 
Among the other works are “We Hold Where Study,” a 2017 film by Wu Tsang and “Painter,” a 1995 video work by Paul McCarthy, both of which challenge various stereotypes of society. There are also paintings in “A mediocre Landscape” series by Sungsic Moon; “Extasis,” a media art piece projected on the staircase by Sohyun Moon; “You and I are Sculptures,” a group of sculptures by Haneyl Choi; and “Telepathic Improvisation,” a video work by Pauline Boudry & Renate Lorenz.